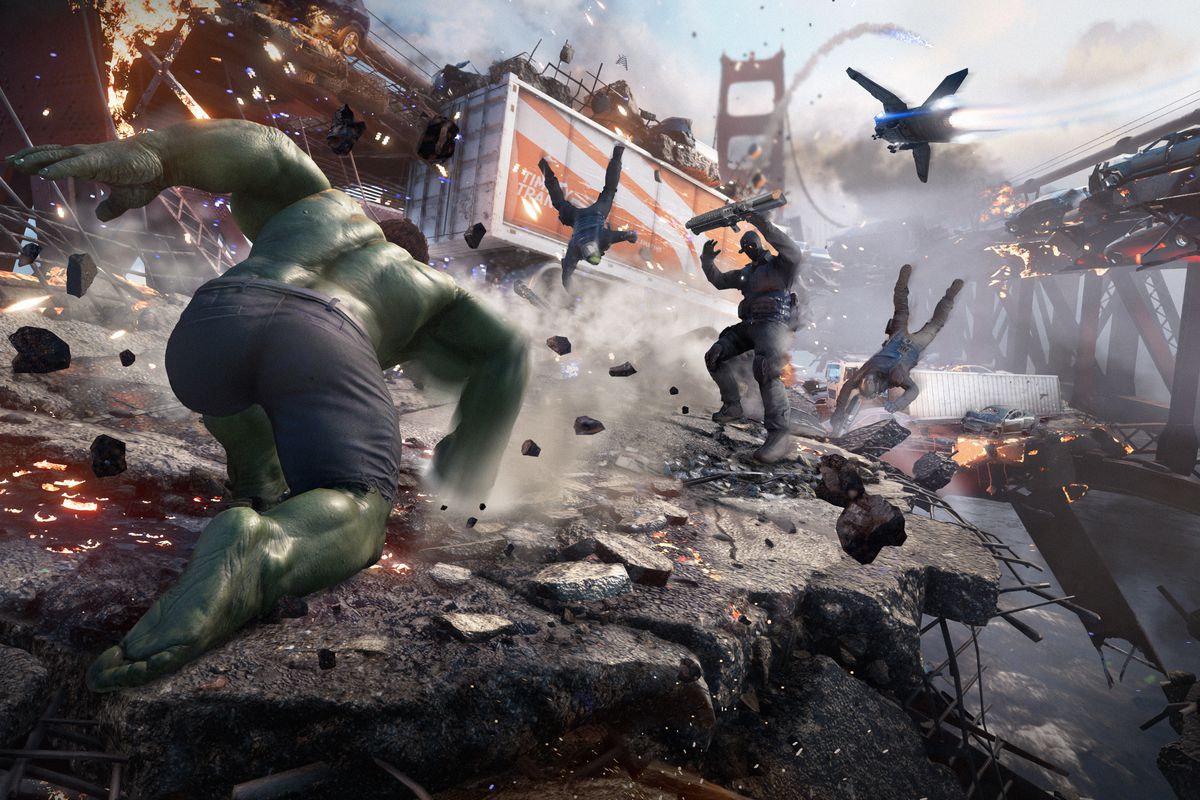 Anthem‘s rise and fall is one of those stories that will almost certainly be told countless times in the coming years as we all try to wrap our heads around how a project that had so much going for it fell so hard and fast with hardly a chance to pick itself up. In some ways, it felt like the game was cursed.

However, if the recent news that Anthem‘s reboot was canceled got you thinking of another live-service game that got off to a pretty rough start…well, you’re not alone. Shortly after news broke that Anthem Next had been canceled, many wondered whether Marvel’s Avengers would be next. After all, the game has reportedly lost millions of dollars so far as well as a huge chunk of the player base that eagerly signed on for the chance to play what seemed to be an infinite Marvel adventure. In reality, the final (or initial) product fell well short of that dream.

Even still, is it really fair to say that Marvel’s Avengers is fated to fall as hard as Anthem did? Well, a comparison between the two titles reveals some striking differences that prove the two are not mirror images of each other as well as more than a few noteworthy similarities that suggest there is at least a realistic possibility that Marvel’s Avengers could indeed become the next Anthem.

Let’s start with the one area where Marvel’s Avengers pulls ahead of Anthem in a big way: its campaign and storytelling.

Many people hoped that BioWare’s storytelling experience would at least ensure that Anthem’s story was better (or at least more cohesive) than Destiny’s, but Anthem’s story was often underutilized and never really hit that second gear. To Marvel’s Avengers‘ credit, the story in that game is legitimately quite good. It’s not particularly long or complicated, but while it lasts, the game offers a heartfelt and interesting Marvel adventure that feels pleasantly distinct from the tones and themes of the MCU films and shows.

You could make the argument that it’s worth keeping an eye on future Marvels’ Avengers expansions for the new story sections alone. That’s not something you could ever say about Anthem or many other games in the live service arena.

Some fans have speculated that Anthem would have eventually gotten better if BioWare had been able to release enough DLC for the title. Given that the game’s Cataclysm update did actually make the game somewhat more appealing, it was fairly easy to buy into that idea.

However, Marvel’s Avengers shows that things can just as easily go the other way. Right now, the biggest draw of Marvel’s Avengers’ upcoming DLC is the ability to play as new heroes. While it doesn’t seem like the pricing plans for those DLC releases are going to be quite as expensive as some feared, the arrangement still comes down to you spending money or spending time on the game in order to take advantage of the new content.

It’s not going to take too many disappointing DLCs for those who spent money on the game to start to feel burnt. For that matter, any future DLC that introduces a character many players simply don’t care about (looking at you Hawkeye) isn’t going to be as valuable as DLC that puts more of an emphasis on adding content for all players. We’ll have to see if more frequent DLC updates will make Avengers feel fresh or like more of a burden than it already is.

One of Anthem’s biggest early problems was the game’s loot system. Simply put, loot just didn’t feel especially rewarding in Anthem due to both the underwhelming quality of the average piece of gear and the frustratingly random ways that you were often asked to acquire it.

Marvel’s Avengers doesn’t suffer from the exact same issues, but the game’s loot is also often fundamentally unsatisfying. Part of the problem is that there’s very little deviation between the average piece of loot besides a higher power level number. That’s not necessarily uncommon in these kinds of games, but unlike Destiny where exotic loot is often associated with the best in-game content and random play can sometimes reward you with incredible unexpected items, acquiring loot in Marvel’s Avengers is still all over the place. The game’s rarity system often conflicts with the actual stat level and abilities of individual pieces, and you rarely feel like you’re truly building out your character over time through new items and gear combinations.

That last bit actually touches upon the biggest issue with Marvel’s Avengers (and Anthem’s) loot system: a lack of character progression and customization

Early on, Marvel’s Avengers players called out the fact that your characters’ looks hardly ever change as you acquire new pieces of gear. According to Crystal Dynamics, their decision to limit the visual impact of new gear stems from their belief that fans would rather use pre-made costumes and designs pulled from Marvel history.

There are two problems with that explanation. First off, not everybody does want that, and the game doesn’t really give you the option to play your preferred way. Even if they did, the idea of having to grind for those costumes outside of the grind for gear doesn’t appeal to everyone. Second, the fact that your character’s abilities and appearance are almost never affected by new gear makes it that much harder to buy into the idea that you’re building a character over time who truly becomes your own.

That’s kind of a big deal considering that part of the appeal of games like Diablo and Destiny is not only watching your character’s abilities improve over time as new gear and skills unlock new strategies but watching them visually transform as well. At the moment, Marvel’s Avengers is struggling at both of those concepts.

Like Anthem, Marvel’s Avengers Simple Combat is a Double-Edged Sword

The fact is that many people are ok with Marvel’s Avengers being a fairly simple beat-em-up title that lets you turn your brain off (mostly) and just enjoy playing as your favorite superhero as you unlock gear with bigger numbers and shinier stat screen colors.

However, there’s a reason why “Easy to learn, tough to master” design makes games like Tetris so popular even if you don’t particularly care about the “tough to master” part. It turns out that even when there is an invisible wall hindering progress, you still benefit from that wall being there as it helps ensure that your personal ceiling remains engaging.

Such as it is, Marvel’s Avengers’ simple gameplay is a tremendous draw and a fair hook, but when you’re looking at the game’s long-term value, it’s clear that Square Enix and Crystal Dynamics have to figure out what the next level is in a way that BioWare never really did.

The first time I ever played Anthem, I actually had an ok time running around with friends laughing at the unrefined early bits and comparing gear. It wasn’t great, but it certainly wasn’t unenjoyable.

However, my interest in the game pretty much tanked as soon as I tried jumping in solo. That’s when all of the title’s problems started to reveal themselves in a way that’s easy enough to ignore when you’re just flying around with friends and goofing off. To make matters worse, chances to make online friends begin to dwindle as the game’s player base did the same. Besides, it was fairly easy to solo much of Anthem‘s content, so I rarely felt obligated to form more than a casual alliance.

Marvel’s Avengers is in a similar place at the moment, and that has to be considered the most disturbing similarity that the game shares with Anthem’s early (and certainly later) days. Because Marvel’s Avengers doesn’t even offer local co-op and because some of the problems we previously spoke about quickly make solo play feel like the grind it’s supposed to disguise itself from being, the incentive to hop back into Marvel’s Avengers has remained low during the post-launch period.

Marvel’s Avengers will have a chance to turn itself around in a way that Anthem never really did due to a number of factors that prevented that game from making a second impression. All the same, the game’s current trajectory isn’t just eerily similar to Anthem’s; it’s reminiscent of a number of come-and-gone live service games that promised the world and ultimately offered poorly disguised mouse traps.