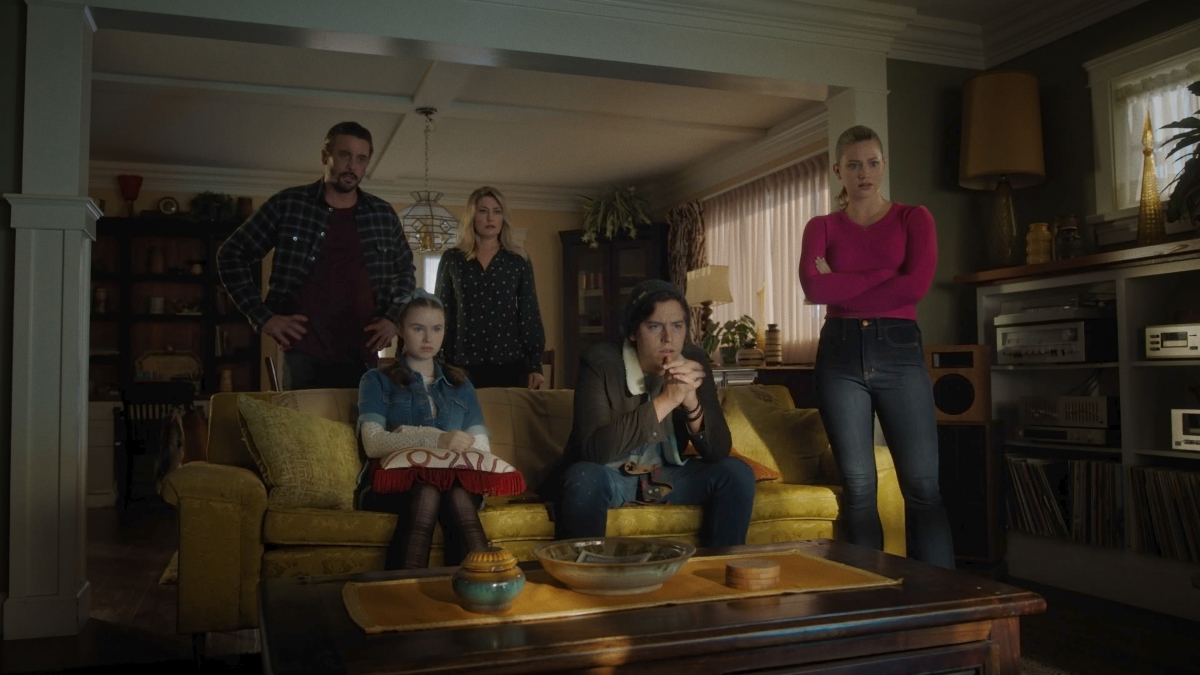 “So now we have a preppy murderer on the loose…”

The most valid criticism about Riverdale over the course of its now five seasons is how the series constantly drags out its ongoing mysteries, only to frantically race to wrap them up. Due to the pandemic, what was initially intended as last season’s big resolution episode just played out before our eyes and it was….kind of meh?

Let’s examine the wrapping up of these various plots from most to least successful, shall we?

As I speculated in last week’s wrap-up, Jellybean was revealed to be the Auteur (with an assist from her friends). This is actually oddly sweet, as the Jughead/Jellybean relationship hasn’t been heavily explored in this show. There is much dramatic mileage to be mined from the fact that these siblings have been separated for most of their lives and when they are finally reunited it is against the backdrop of everything from murderous games of Dungeons and Dragons knock offs to my personal favorite, the town’s Maple Syrup Blood Feud. Sure, the argument can be made here that Jellybean’s lack of realization of how hurtful these demented videos are is straight up psychotic — she definitely seems to be more on the road to becoming a serial killer here than Betty. Yet there is a pure motive behind them, that of a sister who wants to keep her cool brother around that is actually touching.

That said, there are contrivances aplenty to be had with this denouement. Primarily, why would she recreate Archie’s confrontation with the Black Hood? Correct me if I’m wrong, but there wasn’t actually security footage of this incident, therefore Jellybean and her friends couldn’t have staged such a dramatic recreation. Plus, Veronica works at the Chok’lit Shoppe non-stop, so surely she and/or Pop Tate would have mentioned to Archie that a bunch of kids were recreating his worst trauma. With Riverdale, a deluxe cheesburger-sized suspension of disbelief is the order of the day. But this is pushing it.

The second most interesting storyline that played out here unsurprisingly involves Cheryl. From her horror that the graduation uniforms aren’t crimson to her touching scenes with Toni, the character continues to explode energy whenever she appears. There is something hilarious about her utter indifference to her mother poisoning most of her family that makes her all the more endearing. It’s going to be fascinating to watch her attempt to redeem the Blossom family name. But if anyone can do it, Cheryl can.

Next up comes the not-shocking-at-all reveal that Charles is not the stand-up guy we are supposed to think he was. Remember, this was teased early in the fourth season when we saw him lovey dovey with Chic during a prison visit. Since then it’s been a lot of wheel-spinning and I have to admit that I was surprised that he was actually an FBI agent at all given how much subterfuge is always going on within the Riverdale town limits.

This episode introduced the subplot that Jughead’s former Stonewall Prep classmates were being murdered, raising the gigantic question of who cares? Charles believes his motives behind the killings are born of nobility. Narratively speaking, he’s not much of a serial killer though. In fact, Hermosa cold-bloodedly executes more people than he did in this very episode.

It’s another example of Riverdale trying to stick the landing but instead coming down on its knees. If the preppy murders were happening for weeks, somehow piggybacking off of the mayhem the Auteur was creating this all would have been much more effective.

Circling back to Hermosa for a second. Mishel Prada continues to deliver a delightfully cold performance as Veronica’s sister, here tonight helping to mastermind yet another takedown of Hiram Lodge. Maybe this one will stick, as the final episode of Katy Keene showed a future version of Hiram who has taken up residence in New York City, seemingly focused on smaller scale intimidation that his usual Riverdale antics. At this point the pendulum has swung so far back and forth on the character that it’s hard to feel any concern about him either way. With any luck we will see a new iteration of the character following the series’ impending time jump. Otherwise it’s just business as usual for Hiram, and that is beyond stale.

All of this brings us to Archie. Typically this poor kid’s storyline is the least interesting of the lot. It’s a nice touch to show how Fred’s death is at the core of his ongoing ennui, and K.J. Apa is at his best when he shows Archie spiraling. Yet there was never a doubt that Archie wouldn’t write the letter asking the judge for leniency towards the kid who caused Fred’s death. At his heart, Archie is a good kid, and he would have down the right thing without having to involve the problematic Uncle Frank.

Next week: Graduation time, and a glimpse at Riverdale’s future.

• Mary offers Archie some “camo-mile” tea. Whether or not this pronunciation is an actor’s choice or yet another of Riverdale‘s goofy fake productions remains a mystery that even Betty and Jughead couldn’t solve.

• Kevin and Reggie do not appear in this episode. And that is not okay.

• Hermione announces her plans to divorce Hiram and, hilariously, become a cast member on The Real Housewives of New York City in this episode. This development was originally written when Marisol Nichols was planning on leaving Riverdale, however she will in fact be back after the upcoming (and heavily publicized so its not exactly a spoiler) time jump.

• I know there just wasn’t time to show Alice’s reaction to finding out about Charles due to everything else that was happening in this episode, but I would have much rather seen that subplot play out on screen instead of more Archie angst.

• Dramatically it would have been really involving to have Archie confront Jellybean about how utterly fucked up her actions towards him were. Furthermore, her accomplices were kids Archie helped at his community center. There is some real narrative meat to be chewed on there, and hopefully we will see this mentioned in next week’s episode.

• Real talk though, Jellybean and her friends should definitely pursue Hollywood careers. Their skills are legitimate.

• “Are you kidding me Betty, what isn’t wrong?” It’s always so jarring when Archie shows some self-awareness, isn’t it?

• Next week’s episode apparently will focus on the gang’s final days at Riverdale High. Even though school is a massive part of Archie comics, it always feels super weird when the series focuses on it given how heightened the Riverdale reality is.