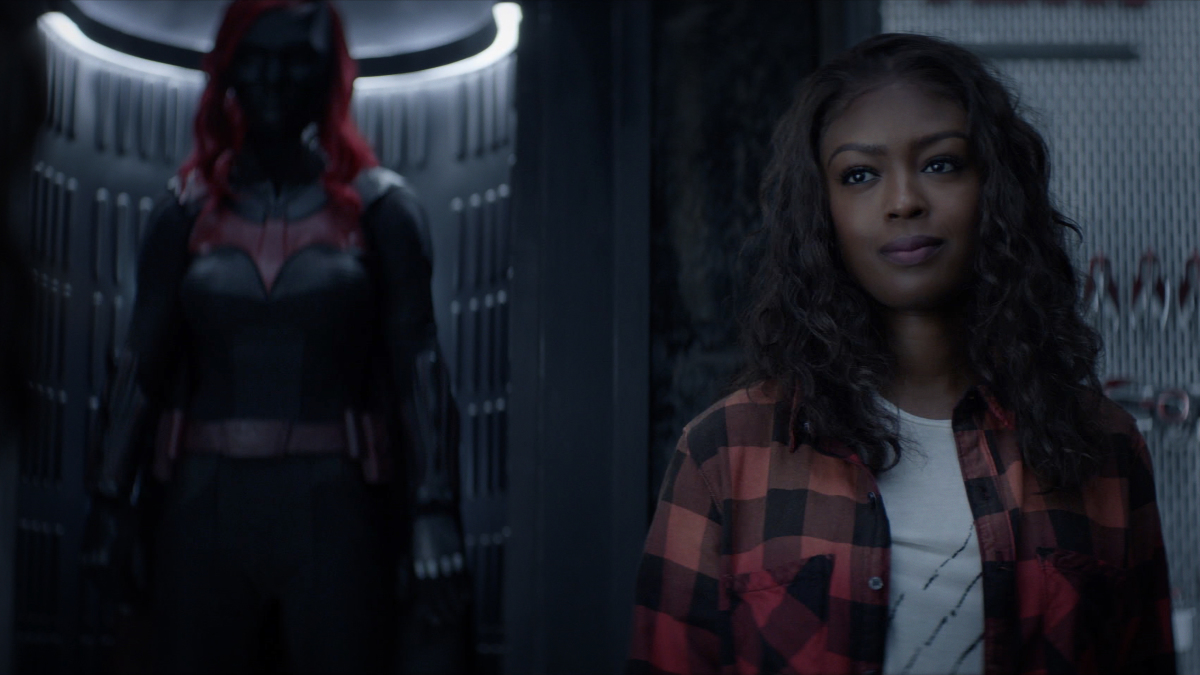 This week’s Batwoman doubles down on an idea first introduced in the season premiere: Ryan Wilder is meant to wear the Batsuit. Last week, Ryan was shot with the kryptonite bullet, which she survived, but is still healing from. The wound isn’t normal, and it seems there will be long-term repercussions for her, especially if she continues to ignore the pain or try to treat it with generic ibuprofen. While trying to procure the pain meds, she stops an attempted robbery, which puts her in Sophie’s crosshairs. This isn’t the first time they meet, and it’s clear Ryan has done this song and dance many times before, demonstrating that her desire to stand up for herself and others pre-exists her finding the Batsuit—a flashback to a night that Batwoman saved her from an attack further proves that she’s always been a fighter, even against unfair odds.

I love the choice Batwoman is making in establishing pre-existing relationships between Ryan Wilder and the people and organizations we are already familiar with. Ryan has a criminal record, and has had many run-ins with Crows, and Sophie in particular. She already has a reason to be wary of them, which makes the situation all the more real for her when she’s their Public Enemy No. 2 as Batwoman. Ryan’s mom was murdered by the Wonderland gang, so she has her own reasons for wanting Alice gone, outside of the fact that she’s a menace to the entire city. Making the stakes personal for Ryan makes her putting on the suit all the more satisfying, especially when she’s allowed to go up against these people from a position of power that she doesn’t have when she’s a civilian. Further, giving Ryan personal ties to Alice and to the Crows allows her to take them on as foes without it feeling like she is just picking up and carrying Kate’s baggage. This episode does a solid job of pushing Kate to the periphery, further cementing Ryan as Thee Batwoman.

Batwoman hasn’t been seen in days, and when video of her being ambushed by the Crows is leaked, the people of Gotham gather by the thousands in a rally of support for her. This is all orchestrated by Alice who sets loose poisonous bats to infect the gathered masses with the same deadly toxin she used to kill Mary’s mom. Ryan has to do more than play the role, she has to take action. She leads the bats away from the crowd, and gets to show off some of her skills— of which driving is apparently not one—and show the city that Batwoman is still riding for them. Still, people are infected, and need a cure. Alice gives Mary the antidote—Alice’s own blood— which Mary hands over to Hamilton Dynamics to synthesize and distribute.

This is all theater. Alice’s larger aim is to goad Safiyah into a tête-à-tête, which Safiyah may soon oblige. She sends Tatiana a.k.a The Whisper to collect Alice when Sophie tries to arrest her solo (girl, why?). We’ve heard her name and seen her handy work, but we’ve only had a glimpse of what she’s capable of. Safiyah feels like the biggest bad, and I’m highly anticipating her on-screen arrival. But until she steps her stilettos on Gotham’s sullied soil, we have a smorgasbord of bad bitches protecting and terrorizing the city, and that is immensely exciting!

What I enjoyed about the first season, and what I am really excited by this season, is that Batwoman centers women. The show doesn’t just feature a lot of women, the stories revolve around those women. They drive the action, they are the emotional anchors, and without them, the show doesn’t work. With Ryan, they’ve also widened the perspective, giving as a different entry point into this world. Ryan sees Gotham differently than Kate did, and she has a different relationship with power, wealth, and authority. She’s different not just because she’s a Black woman, though that is a factor, but because her lived experience vastly differs from Kate’s or Mary’s or Sophie’s. Often times we root for the woman because she’s the only one, or we root for the one character we share a racial or queer identity with. Batwoman is allowing us to identify with and relate to different types of women, and that’s such a powerful thing.

Sometimes equity in fiction looks like a ploy for woke points by studios, especially when pains are taken to employ women of color. But when those decisions are made purposefully and with genuine intent, what results is something amazing. Batwoman has never felt like a gimmick to me. I didn’t look at the casting of Black and Asian supporting characters and think, “this is for show”; the decision felt like a genuine attempt at reflecting the real world as it is, and is one of the reasons I kept coming back. The casting of Javicia Leslie felt like a doubling-down on the premise that women, and women of color, and Black women especially are powerful and heroic and nuanced. Criticism of certain backstory choices aside, I like what Ryan means for Batwoman, the show and the character.

If these first two episodes are anything to go on, Batwoman has no intention of slowing down or pulling punches and I, for one, am fully prepared to take the ride.