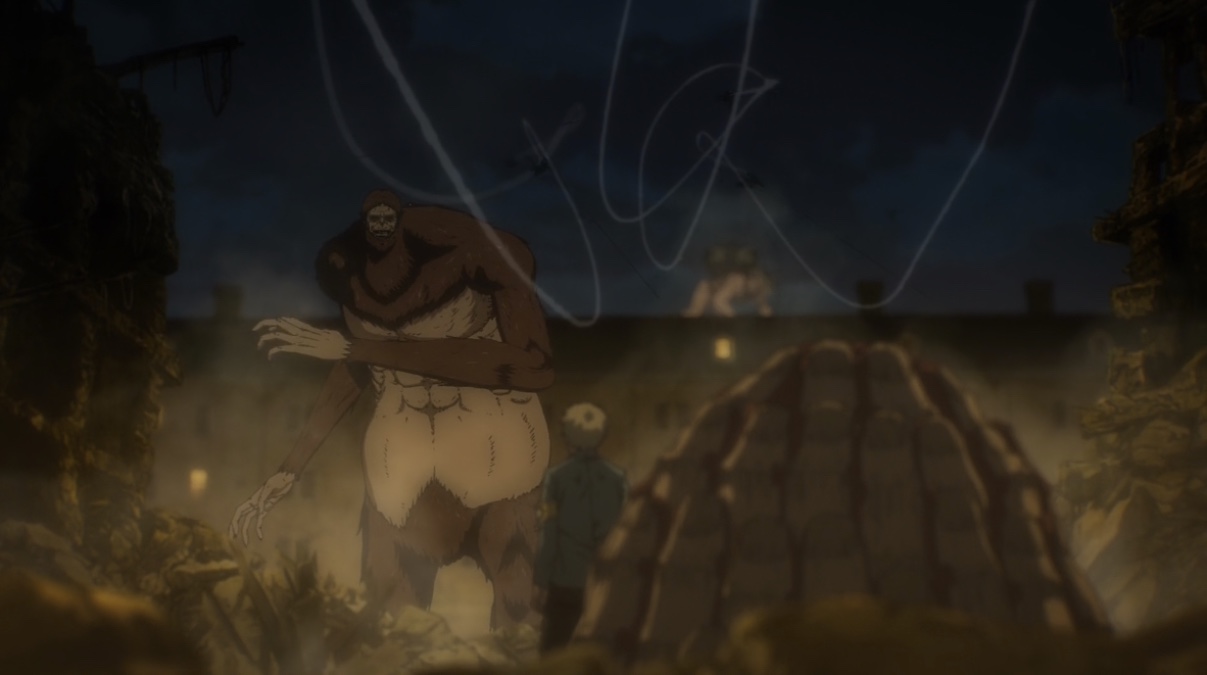 “These are the demons of Paradis Island…”

Who are the good guys in this war again?

Attack on Titan has been asking this question all season, but it’s beautifully articulated now that a full-fledged war is in swing between Marley’s best and the “Eldian Devils.” The previous episode begins this conflict, but every single character that the anime has carefully built over these four seasons comes into combat with each other in “Assault” and it’s just fantastic.

This is a very busy installment and it’s likely to be a favorite for many since so much of it is just Titans wailing on each other in a bid for supremacy. It’s the ultimate, heightened version of the series’ original premise and it’s every bit as satisfying as it should be. Attack on Titan has had several episodes that are pure action and in the throes of war, but “Assault” is a much more complex exercise due to the series’ recent changes.

“Assault” is the payoff of not just the first third of the season, but everything Attack on Titan has ever explored. This has evolved from a show about how to work together to overcome the Titans, to how to effectively work with a Titan, to what’s now become a plan to best use Titan abilities against each other as if they’re powers from a Mega Man game.

It’s a chess match with monstrous giants and it’s still amazing how Attack on Titan can incorporate such strategy and precision into these blunt weapons of destruction. “Assault” is full of wonderful battles, like Eren and Mikasa against Galliard’s Jaw Titan, Jean’s assault on the Cart Titan, or Levi’s strike against Zeke and his Beast Titan. However, what makes “Assault” work so well is not the action itself, but how it makes it genuinely difficult to root for anyone here.

I found myself shocked that during all of these battles I truly didn’t want to see any of these characters die and Attack on Titan plays into that energy. It wants the audience to feel conflicted and unclear on who they should be rooting for, which becomes even more palpable when in combat. “Assault” teases so many opportunities where characters are close to defeat, only for someone from their side to rush into their rescue at the last minute.

This would feel manipulative in a lesser program, but here it’s actually thrilling to see the strength of everyone’s support. Additionally, there’s even a mutual respect of sorts between the Titan as brief moments of commiseration are shared between Eren and Reiner or Jean and Falco. The show has done its work to make sure that everyone’s motivations here resonate, including the Marley folk that have been around for considerably less time.

What also helps all of this war have a greater significance is how it explores its impact on both Gabi and Falco. Every episode makes a stronger case for how Gabi and Falco are actually the main characters in this larger narrative. I’ve highlighted how their stories this season eerily parallel Eren and Mikasa’s from the start of the series and it increasingly feels like this young generation will be the ones who are left alive to tell this story when everything settles.

These events are the catalyst that set Gabi and Falco in very different directions, with Gabi on a rampage to murder Eren and Falco’s ignored attempts for pacifism. It’s heartbreaking to watch him ask everyone to end this chaos and how he’s just completely ignored. This is a war that won’t be ended by some optimistic speech about peace and togetherness.

“Assault” also explores a fascinating component of the Titan bearer physiology that’s never really been tackled before. Those with the Titan ability have a capacity to heal at a rapid pace and regenerate, but it can only be done if the individual possesses a strong desire to survive. This detail didn’t seem like it would even turn into some kind of technicality, but the fact that Reiner struggles to completely heal from his wounds because he doesn’t want to live and has succumbed to fear is chilling. It drags Falco down even further.

Falco becomes Reiner’s champion throughout “Assault,” but it’s a grim, human element that’s featured throughout all of the intense action. Reiner had a shotgun in his mouth only a few episodes ago, so his defeatist attitude is not exactly new territory, but it is for Falco, who’s grown to idolize Reiner. It effectively reflects the abject terror that’s present in so many Marleyan individuals and a contrasting spectrum of responses to the unexpected attack. In lieu of all of this death and destruction, the person that Falco would turn to for support has already given up. The competition to decide which Warrior will inherit the Armored Titan ability isn’t over, but they’re prematurely forced to be heroes here and fight for their future.

Every fight in this episode is so satisfying that it’s unnecessary to break them all down. There’s gorgeous fight choreography from top to bottom and it’s at times overwhelming just how much happens here. However, what’s by far one of the biggest moments in the season so far is witnessing Armin transform into the Colossal Titan for the first time. It’s beautifully handled here and there’s still a bit of whiplash to watch a cherub like Armin wipe out fleets of people with the very creature that he feared for so long.

Levi also gets his first real opportunity to shine this season and his attack against the Beast Titan and all of the uses of Thunder Spears and explosives effectively demonstrate how much these characters have improved. The return of Hange in a freaking airship and Jean’s decree to just wipe out the entire city are also deeply conflicting scenes. Attack on Titan doesn’t allow the audience to cheer over their returns because they function like emotionless enemies.

“Assault” has a lot of fun with the tension that’s created out of this identity crisis and it has the audience question every punch in a way that’s never been present before. All of the most disturbing moments in the episode come from Eren, not anyone from Marley. Eren’s most twisted act is when he viciously dismembers the Jaw Titan and uses its jaws to break the Warhammer Titan’s crystal.

As Galliard is forced to kill his friend, it feels like a very personal violation on Eren’s part. His Attack Titan gluttonously drinks the crystal’s fluids to acquire its power and the Tybur family loses another family member. Eren’s unsuccessful in his follow-up attack to also consume the Jaw Titan, but he’s still done significant damage here and it’s more evidence of the ruthless nature that he’s adopted over these past years. It’s the first time I’ve been actually disgusted by Eren and it’s easy to be Team Gabi at this point.

Neither the Eldians or the Marleyans are any closer to peace by the end of “Assault” and the new ability that Eren gains is almost undercut by the new enemies that he makes. This is a marvelous episode that represents everything that’s great about Attack on Titan and how this season continues to reflect that there are no winners in war. This may seem like a pat or obvious message, but the structural work of this series gives this adage a powerful poignancy that’s just as strong as blows from a Titan.

History is often doomed to repeat itself, but maybe Gabi and Falco will be able to break this generational cycle of violence rather than continue to perpetuate it. Then again, Eren’s kind of asking for it…