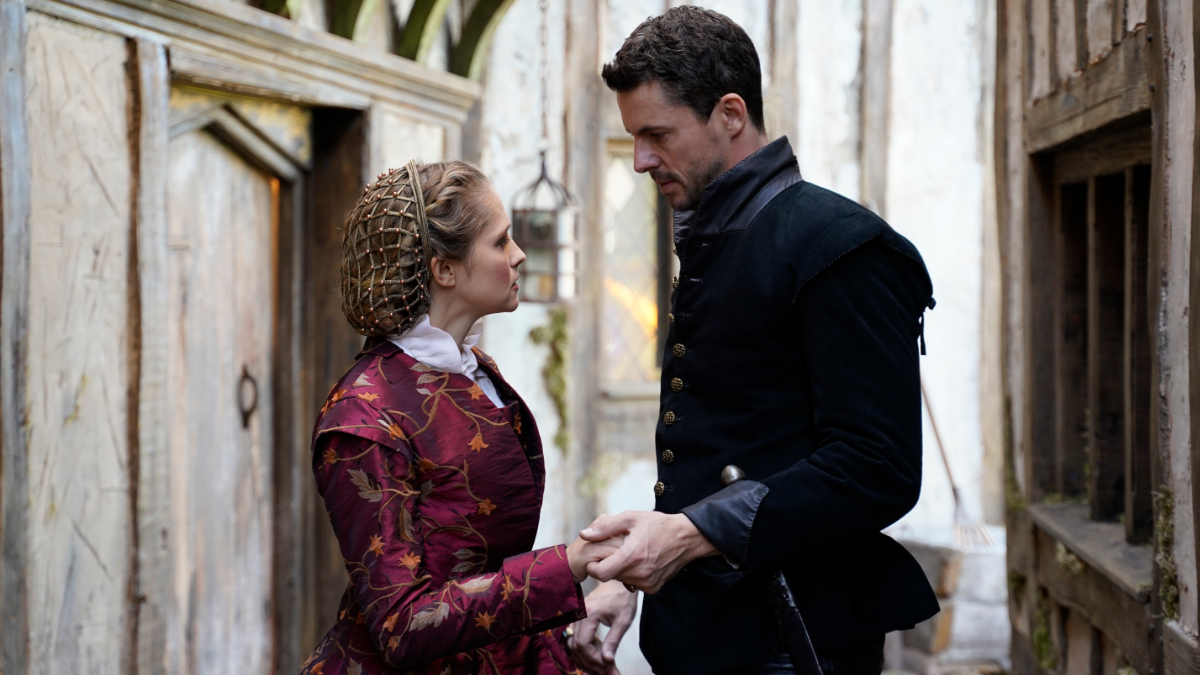 This A Discovery of Witches review contains spoilers.

Grrrngh, click, vroom. Hear that? The sound of a series revving out of the muddy furrow in which it’s languished for two episodes, and getting back on track. Episode three gave us much less Matthew in the tower, and much more Diana spontaneously sprouting tree branches from her fingertips and playing interdimensional cat’s cradle with the gleaming strings of life. Witch stuff, not spy stuff! And all the better for it.

Episode three was also all the better for a shift in Matthew’s behaviour. There was just the one growl, and an entirely pardonable one seeing as it was directed at Kit Marlowe, a character whose self pity would have anybody baring their teeth. We saw the return of Matthew the diplomat, a man acting like he’d learnt a few things from his centuries of experience instead of a man who didn’t get any sleep on the flight over and just spilled hot coffee on his lap. Politic flattery, not a choke-hold, was Matthew’s weapon this week.

Father Hubbard was his first mark, a threat instantly reduced with some faux-deference and some genuine regret. Hubbard has now served his narrative purpose by bringing Philippe de Clermont into the mix, so hopefully that’s job done and fare thee well for him. There’s currently a surfeit of characters declaring themselves the boss of London whom nothing gets by without them knowing about it (including the legit Queen of England), so Hubbard wouldn’t be missed.

Next came the Queen’s astrologer John Dee, who only required the slightest nudge to give Matthew and Diana what they wanted – a premise to go to Bohemia and track down Edward Kelly and the Book of Life. Through more deference and flattery, the couple secured the Queen’s permission to travel in her name, cleverly framing the quest as a proof of loyalty to her majesty.

Loyalty is an emerging theme of season two. Between Lord Burghley, Elizabeth I, his father, his faith, his newly arrived nephew and his witch, Matthew’s is being pulled in multiple directions and the strain is showing. Now there’s a trip to Sept-Tours on the itinerary, to see his dead (twice dead, really) dad, about whose sad fate he must pretend ignorance. Matthew’s situation is a step or two more psychologically complex than this show usually ventures, but we know that Matthew Goode can capably go anywhere the character takes him.

Kit’s loyalty was the subject of his telling-off from Matthew – unfairly so as it wasn’t him who told Cecil about Mistress Roydon being a witch. Surely the source of the Water Lane leak is poor young Jack, the Roydons’ pickpocket-turned-adoptive son. Jack’s presence in the episode showed us another engaging side to Matthew – the caring father he once was to his own son.

It also showed us that the Roydons aren’t the deepest thinkers on the block. Who adopts a child on what is, essentially, a gap year? What happens to Jack when they return to the present day? More consideration has gone into the fostering of some hamsters than the rescue of that little boy.

For an academic, deep reflection doesn’t seem to be Diana’s mode. She’s more a doer than a thinker. This week, for instance, saw both the start and the end of her magical training with the Gathering. Just two lessons down and it was ‘Goodbye Goody Alsop, I’ll pick the rest up along the way. Knots, wasn’t it? I’ll figure it out.’

The training scenes were a lot of fun, partly because of the reassuring presence of Sheila Hancock (everybody should have a teacher like Goody Alsop), and partly because that knot-tying business looked the absolute business.

Much of this episode looked the business in fact, thanks to a crop of moodily atmospheric locations that have finally filled this show’s Bodleian-shaped gap. Hubbard’s crypt, John Dee’s library – complete, as all libraries should be, with a stuffed crocodile suspended from the rafters-, the palace at Whitehall (where Diana’s collar alone was good for at least 10 minutes of enjoyment), even Matthew’s office is a rewarding place to spend time. Kudos to the production design and location teams.

Venice is always a rewarding place to spend time, and that’s where the episode left us, on the cliff-hanger that Domenico has been playing the long game. The time has come for him to make his move and reclaim the city from Gerbert. How’s he going to do it? By offering up the destruction of the De Clermont dynasty, courtesy of a mangled body on an Oxford street.

When series two gets its head out of Matthew’s dark alleys and looks up, it’s capable of real intrigue. Speaking of which, what’s that Aunt Em is cooking up? Did she say… Rebecca?