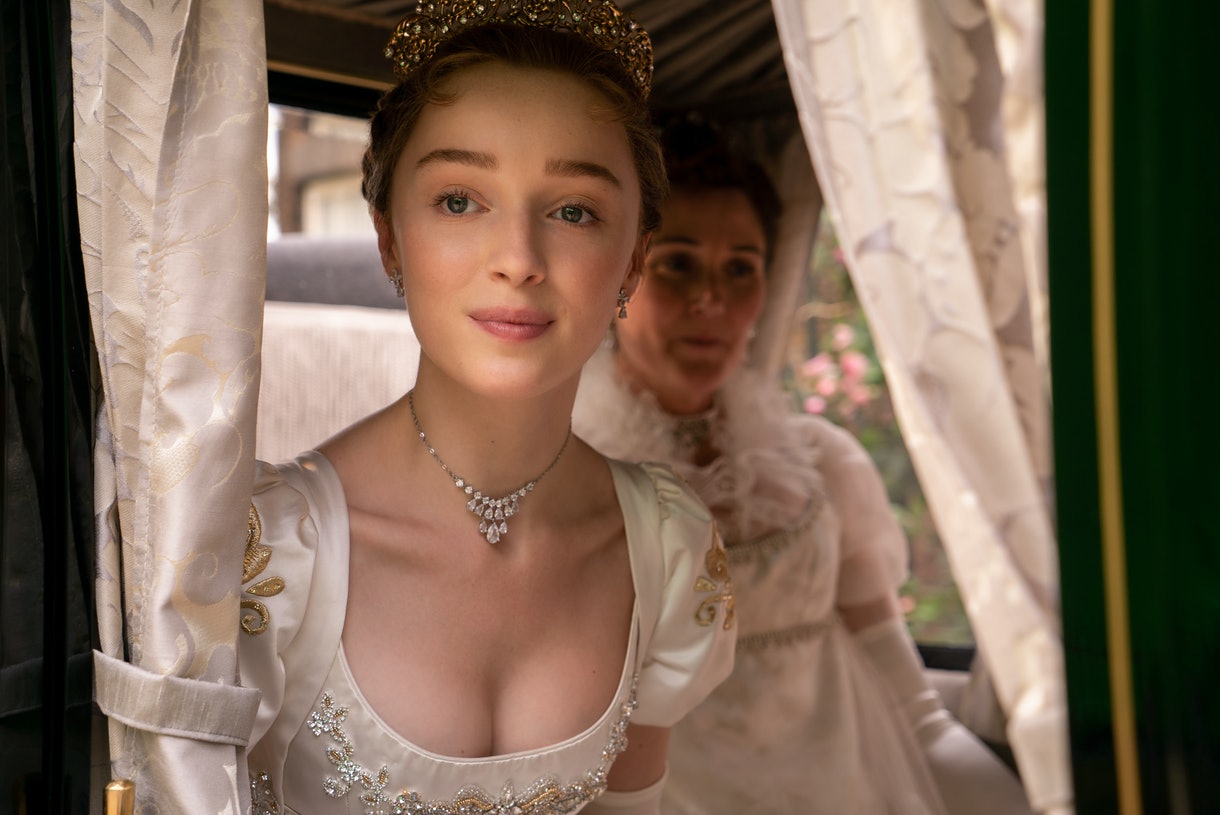 Though Bridgerton is a story of multiple romances – and many different kinds of love – its first season centers primarily on the relationship between debutante Daphne Bridgerton and the roguish Simon Bassett, Duke of Hastings. But it would be a mistake to assume that the romance is the only story this series is trying to tell or even its ultimate endgame. In truth, the real story of Bridgerton’s first season is about a young woman coming into her own, learning who she is, what she really wants, and how to find her own strength along the way. Eldest daughter Daphne Bridgerton may begin the series as a largely sheltered ingenue, but by its end, she is a confident, capable – and, yes, sexual – woman who is determined to make the most of her own power in a world that wants her to believe she doesn’t have any.

As the most generally “normal” and predictable of her siblings, Daphne is easy to overlook as a character in her own right. It’s easy to cheer for Eloise as she loudly rejects the established gender norms of her day or hope that Benedict manages to find a way to make a life for himself out of the art he so clearly enjoys. Heck, even Anthony has a dramatic secret sex life. In comparison, Daphne may seem, well, a bit dull.

For many viewers, Daphne is only even memorable because of the fact that she gets to have sex with the very attractive Simon in a variety of gorgeous locales. This is unfortunate, particularly when there’s so much more to the eldest Bridgerton daughter than her relationship with a handsome man who seems to be allergic to shirts. In fact, Daphne is honestly fairly incredible as romance heroines go: Smart and dutiful, kind and spirited by turns, with an arc that sees her come into her own in a truly satisfying way.

Yes, Daphne’s desires are largely “simple” ones, which is to say traditionally feminine ones. She longs for a love match, a happy marriage, children of her own, and a home overflowing with the same warmth she was raised in. But far too many people assume that for this character “simple” somehow means the same thing as “boring.”  Which, let’s be clear: Daphne Bridgerton is anything but dull.

From her first moments on screen, the eldest Bridgerton daughter is remarkable. Named a “Diamond of the First Water” in the pilot’s opening moments for the act of simply being poised and pretty, Daphne spends the rest of the series’ first season quietly pushing back against the idea that her polite, delicate facade is all that she is – or all she’s allowed to be.

This is the same woman who punches a would-be assailant in the face and flings herself physically in the middle of a duel to protect the people she cares about, after all. Under that ice-blue pastel exterior is a spine of steel.  Over the course of Bridgerton’s first season, Daphne consistently makes space for herself in a world that doesn’t want to give her any choices, and she does it without compromising who she is or pretending to be something she’s not.

Even as she dutifully follows the rules, she’s well aware of how restrictive and oppressive they are and resents them for it. Daphne repeatedly points out that, at best, she’s allowed the barest illusion of control over her own life, and that she would be almost instantly ruined for indulging in even a fraction of the activities that her brothers are slyly applauded for.

Anthony, for example, can show up late to public events (that include an audience with the queen), take a mistress, and shirk any responsibility as the de facto head of the Bridgerton family, all while facing few if any repercussions for his actions. (Sorry, occasionally, his mom gets mad.) But Daphne must carry the fate of all her younger sisters with her into every single parlor and ballroom, as it is Eloise, Francesca, and Hyacinth who will pay the price socially if she puts so much as a foot wrong.

The triumph of Daphne’s story lies in the fact that, though she achieves what would, by the standards of her day, be considered the ultimate dream, she doesn’t let it make her hard, cynical, or complicit in the same system that oppresses other women like her. Her elevation as a duchess means she can assure public life will be easier for her sisters and step in to help other women who are similar victims of a social system that’s geared toward the benefit of men.

And it is her experience with Simon – which leads to her realization of how purposefully ignorant she was kept about matters of sex, marriage, and communication – that ultimately shows her not just how much she doesn’t know, but how it is women like her who help uphold that system of ignorance.

It should be noted that Bridgerton does Daphne a great disservice by essentially porting over a sex scene of questionable intent from the novel the series is based on without using it to explore larger issues of consent and manipulation. In it, Daphne forces Simon to release inside of her, as something of disturbing relationship test – an attempt to figure out whether everything he’d told her about sex and the basic biology of creating children had been a lie.

It was, but that doesn’t make her actions any less terrible and one of the biggest flaws in the first season is that Bridgerton never really addresses them in any significant way. Tying Daphne’s treatment of her husband to the larger narrative of her growing understanding of sex, knowledge, and power would have been a natural next step in her emotional journey. Particularly when so much of her story is about her recognition that though she may not be able to overthrow the patriarchal system of power she lives in, she can still work to change it – or at least dampen its impact – from within.