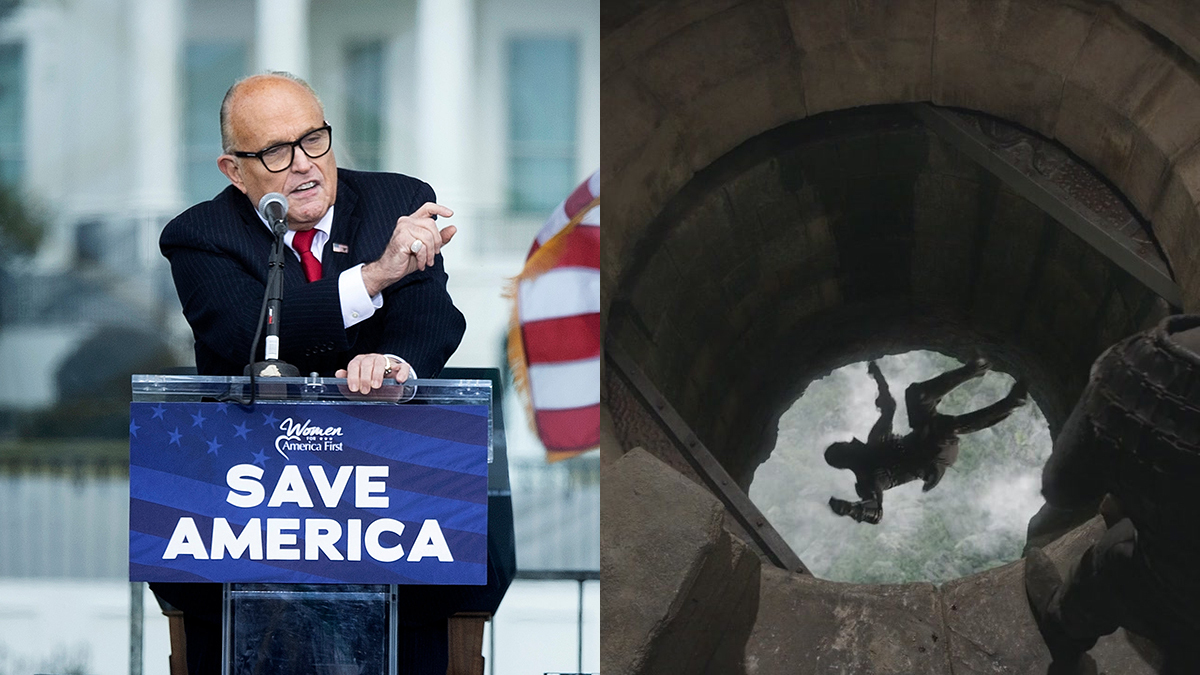 Rudy Giuliani just had a terrible year. Once, long, long ago, he was revered as “America’s Mayor.” Now the former politician and current attorney to President Donald Trump ended 2020 by asserting baseless and disproven lies about election fraud; losing over 60 court cases; facing an inquiry from the New York State Bar Association; and learning that Trump is trying to stiff him for the effort. So his poor ability to process the themes of Game of Thrones, either as TV series or George R.R. Martin’s source novels, ranks pretty low on his list of disgraces.

… Nonetheless, it joins the pile!

Aye, Giuliani’s dubious choice of invoking Game of Thrones comes on the heels of his greatest failing to date: using menacing rhetoric on Jan. 6 before a mob that went on to storm the U.S. Capitol in a siege that can fairly be described as a domestic terrorist attack. With critics arguing that Giuliani’s words—about letting there be a “trial by combat” to a crowd of thousands of Trump supporters about to march toward the Capitol—helped incite violence, Giuliani has offered a weak defense for his language: He was only referencing Game of Thrones.

The excuse came up in an interview with The Hill’s Brett Samuels. In the exchange, Giuliani insisted, “I was referring to the kind of trial that took place for Tyrion in that very famous documentary about fictitious medieval England. When Tyrion, who is a very small man, is accused of murder. He didn’t commit murder, he can’t defend himself, and he hires a champion to defend him.”

So, ignoring the former mayor’s poor attempt at humor by using the word “documentary,” Giuliani’s defense for alluding to medieval acts of violence is he saw it on Game of Thrones?

Trial by combat occurred twice in Game of Thrones, with both instances involving Tyrion Lannister, as played by Peter Dinklage in the series. It’s unclear which scene Giuliani is referring to, but the earliest occurred in the first season when, wrongfully accused of planning Bran Stark’s murder, Tyrion is forced to demand Trial by Combat for a fair “trial” in the Eyrie. In that instance, a mercenary named Bronn (Jerome Flynn) agrees to defend the besmirched Lannister for coin and the opportunity of advancement. In Season 4, Tyrion is again wrongfully accused of a crime—this time the murder of his boy-king nephew—and again demands a trial by combat when faced with a biased judge. This time, however, his champion Prince Oberyn Martell (Pedro Pascal) fails to win the trial, and has his head crushed like a melon.

Tyrion is promptly sentenced to death.

Whether Trump’s lawyer was thinking of Bronn or Oberyn, either way Giuliani’s excuse for his language is to reference a fantasy television series in which crude medieval combat is used as a substitute for actual legal recourse. He is referencing fictional sequences where a feudal society literally endorses the concept of “might makes right.”

In our actual reality, trial by combat dates back to around the eighth century in central Europe. Popular in the Germanic lands and some European courts through the 1500s, and a precursor to the Code duello, these duels were a barbaric way of settling disputes in the absence of legal recourse.

Game of Thrones’ writers, on page and screen, realize this and depict it as a gruesome and futile form of state sanctioned barbarity. Tyrion is also aware of this, and only invokes “Trial by Combat” because in his feudal society, the law is what monarchs and despots like his father Tywin Lannister (Charles Dance) make of it. He has no legal avenue to defend himself other than to descend into violence. And it is again highly arbitrary since the duel his champion loses is the one where Oberyn has the understandable right to want revenge on his opponent for raping and murdering his sister—a crime the “the Mountain” (Hafþór Júlíus Björnsson) got away with because of the corruption of Westeros’ dubious justice system by powerful wealthy family and their sycophants.

Conversely, back in the real world, Giuliani and his client had ample legal opportunity to dispute the 2020 U.S. election, but were dismissed in court uniformly for the frivolity of their claims and lack of evidence. So instead of accepting the results of his exhaustive (and corrosive) legal efforts, Giuliani told an angry crowd to pursue a “trial by combat” when they march on the U.S. Capitol. His words suggest embracing a descent into medieval barbarity, where corrupt monarchs and men who wish to call themselves king decide what is reality, what is truth, and who is the state.

So even if Giuliani really was just referencing Game of Thrones, it still falls as flat as Lysa Arryn did through the Moon Door.

Disney+ New Releases: March 2021
How Zack Snyder’s Army of the Dead Could Nod to Night of the Living Dead’s Greatest Mystery
The Best PSUs for PC Gaming From be quiet! for Every Budget
Marvel Studios’ Avengers: Endgame – Official Trailer
Nancy Drew Season 2 Episode 6 Review: The Riddle of the Broken Doll