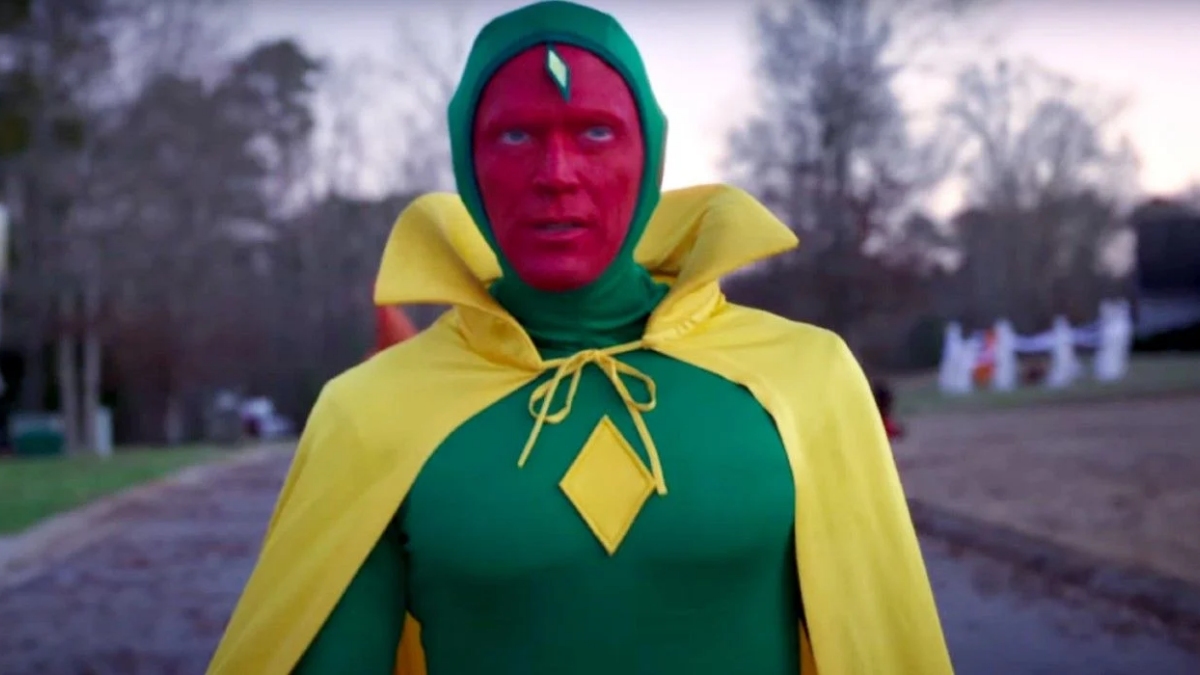 WandaVision has been considered one of the more unique concepts for the Marvel Cinematic Universe. The new Disney+ show takes two members of the Avengers and puts them in a new setting with a sitcom motif that is intended to be a comforting status quo but is anything but. As the layers begin to peel back on reality, this story of a wise android and his magic-wielding wife is more of a bonkers horror mystery than anything else.

To have this as the first step in the long-awaited Phase 4 of the MCU is a ballsy move. A move forced because of the worldwide COVID situation, but a ballsy move regardless. How do you even explain the concept of the show to someone who is taken in by the commercials or sees the icon on the Disney+ menu? Avengers: Infinity War also had a lot of baggage going in, but even that was easily explained as, “all the heroes team up to stop the big villain from gathering all the special power-ups before it’s too late.”

To help you prepare for WandaVision, I’m going to focus on the MCU history of Vision, as played by Paul Bettany.

To understand Vision, you have to go back nearly a century to the life of Edwin Jarvis. A member of the British Armed Forces, Jarvis eventually left the battlefield to work as a butler for millionaire inventor Howard Stark. A loyal friend, Jarvis worked for the Stark family for roughly 50 years. Howard and Maria died in the early ’90s, leaving Jarvis to act as a father figure to the orphaned Tony Stark.

While the details of Edwin Jarvis’ death are unknown, Tony would ensure that his name, wisdom, and work ethic would live on. Tony invented an artificial intelligence called Just A Rather Very Intelligent System, otherwise known as JARVIS. With a voice and personality similar to Edwin Jarvis, JARVIS acted as a disembodied security system and information hub for Tony Stark.

This proved especially helpful when Tony Stark created the second incarnation of the Iron Man armor and installed JARVIS as his co-pilot, offering advice and information when necessary. JARVIS aided Iron Man in Iron Man’s trilogy of solo films, as well as the first Avengers movie.

The first Avengers movie involved the team fighting off an alien invasion led by the mad god Loki. Despite winning, Tony Stark retained a lingering fear that there would be bigger and more destructive aliens on the way eventually. Earth would never be truly safe. As he was in the process of leaving his Iron Man duties behind, Stark felt that Earth needed its own worldwide security system. As he put it, a suit of armor around the planet.

The Avengers defeated the terrorist cell HYDRA and, in doing so, obtained the Mind Stone. Previously, in Loki’s hands, the Mind Stone was a tool to conquer the minds of enemies and turn them into allies. In HYDRA’s hands, it was a tool to awaken latent abilities in those who survived intense exposure to it, such as twin siblings Wanda and Pietro Maximoff. Tony Stark and Bruce Banner decided to play God by creating a brand-new and incredibly advanced AI out of the Mind Stone that would have the capacity to protect the entire human race and fight off any potential invaders.

While Stark and Banner were gone, the Ultron AI awakened. JARVIS attempted to coax it, but Ultron’s tabula rasa form being bombarded with so much information was too overwhelming. The Ultron AI immediately went mad and tore apart JARVIS’ programming. Ultron created a series of bodies, attacked the Avengers, and declared war on the world.

Since Ultron was able to extend his consciousness to various robotic bodies, he intended to create the ultimate android body to make himself truly unbeatable. This host body, which included the special metal vibranium, synthetic tissue, and the Mind Stone, was stolen away from the Avengers.

What Ultron didn’t realize was that pieces of JARVIS’ programming still existed and were able to keep Ultron from spreading his AI to the internet or government nuclear programs. Stark chose to upload what was left of JARVIS into the android body and Thor gave it life with a blast of lightning.

A red, flying humanoid sprung to life, calling himself Vision. Other than flight, he could fire lasers out of his forehead and alter his mass so that he could phase through matter or turn himself so dense that he was borderline unbreakable.

While he had JARVIS’ voice and demeanor, he was not quite JARVIS…albeit not quite Ultron either. Explaining that he was on “the side of life,” he offered his assistance to the Avengers and proved himself noble and pure-hearted by picking up Thor’s hammer Mjolnir, a feat only possible to those considered worthy.

Then again, Captain America and Iron Man would later argue that Vision wasn’t so much “worthy” as his machine biology allowed him to bypass that magic (ie. an elevator could theoretically “lift” Mjolnir despite its lack of sentience). Thor refused to agree with their logic.

Thor also realized the true meaning behind the Mind Stone on Vision’s forehead and how it was part of the six Infinity Stones, which were otherwise scattered across the galaxy. Due to his powers and proven worthiness, Thor felt the Mind Stone was in safe hands.

Vision helped the Avengers defeat Ultron in the final battle in Sokovia. Ultron’s main body, as well as countless drones, were completely destroyed. Vision tracked down the final, mangled Ultron drone. This drone, the last home to Ultron’s consciousness, debated with Vision about the fate of mankind. Annoyed by Vision’s optimism, Ultron charged and was quickly vaporized. The Age of Ultron was over before it could truly begin.

An Avengers mission, that Vision is for some reason not part of, went horribly wrong when Scarlet Witch tried to move a suicide bomber away from the area with her telekinesis. The explosion went off before she could clear it from the area, causing many deaths. This controversy helped create the Sokovia Accords, which decreed that the government had oversight in the Avengers’ duties, else they would be considered criminals.

The various heroes had differing thoughts on the matter. Vision felt that the increase of superheroes and supervillains meant that the chaos would also increase and that government oversight was the right way to go. He also agreed that it was in Wanda’s best interests to remain at Avengers Headquarters and refrain from appearing in public until everything blew over. The two bonded during this time, but Wanda was not entirely comfortable with the pressure to stay in the complex, guilty feelings or not.

The split over the Sokovia Accords led to everyone taking a side with either Captain America or Iron Man. Hawkeye entered Avengers Headquarters to get Wanda to join Cap’s side. Vision easily defeated Hawkeye in combat, but Wanda was able to overpower him with ease. She had enough of living in fear and wanted out.

The two met again on the battlefield as the two warring sides fought it out at an airport. Vision was indeed a heavy hitter for Iron Man’s side, but he wasn’t without fault. His feelings for Wanda muddied his robotic sense of accuracy. As he tried to blast a laser at Falcon, he missed and instead hit his ally War Machine, accidentally causing him to crash and lose the use of his legs.

Regardless, Iron Man’s side won. Wanda and some of the others on Captain America’s team were put in a special prison. Soon enough, they were sprung free by Captain America himself, now a fugitive.

Even though Wanda was part of Captain America’s covert team (existing in spite of the government’s wishes), she still found time to be with Vision. The two became romantically involved and Vision even figured out how to morph his appearance into something more human-looking. As they vacationed in Scotland, they quickly discovered that Vision was in the crosshairs of a major plot to annihilate half the universe.

The sinister alien villain Thanos had wanted to bring together all six Infinity Stones so he could wish away half of all life and therefore – in his twisted logic – prevent overpopulation. Having just discovered a lead on the Soul Stone, he then knew the whereabouts of all six and prepared and all-out blitz to capture them all over the course of a couple days.

A few of Thanos’ most powerful soldiers ambushed Vision and Scarlet Witch and came very close to removing the gem from Vision’s head. Luckily, Captain America, Black Widow, and Falcon arrived to ward them off.

At first glance, the answer was simple: if Thanos needed all six Infinity Stones to succeed, then they could just destroy the Mind Stone. Scarlet Witch’s powers were linked to it, so she presumably had the ability to break it. Considering that would kill the love of her life, she refused. Instead, they would go to the advanced African country of Wakanda, where the super-smart princess Shuri would be able to remove the Mind Stone from Vision’s head without killing him. Then Wanda could trash the gem and Thanos would be thwarted.

Thanos’ forces raided Wakanda, as expected. Eventually, Scarlet Witch and Vision had to take part in the battle rather than wait for Vision to get the gem removed. Although badly wounded in the process, Vision was able to kill Thanos’ henchman Corvus Glaive thanks to Captain America’s help.

Vision begged Wanda to destroy the Mind Stone, even if it would cost his own life. Reluctantly, Wanda did so while Thanos (armed with the other five Infinity Stones) arrived and easily dispatched the other heroes. Wanda succeeded in blowing up the Mind Stone. Vision was dead and Wanda broke down.

Thanos showed compassion for her sacrifice, but it meant nothing in the end. Thanos had the Time Stone, which allowed him to rewind the clock and bring the Mind Stone back. Thanos brutally tore it from Vision’s head and left the lifeless husk behind.

At first, Thanos succeeded in his mission and erased half of all life from existence. This included Wanda Maximoff. Five years later, the Avengers were able to bring everyone back and Wanda even meted out some form of vengeance against Thanos for a moment.

While all those snapped away returned, Vision was not so lucky. Not only was he still dead, but the Infinity Stones had been destroyed and there was virtually no way to rebuild him.

So then…what’s he doing in WandaVision?