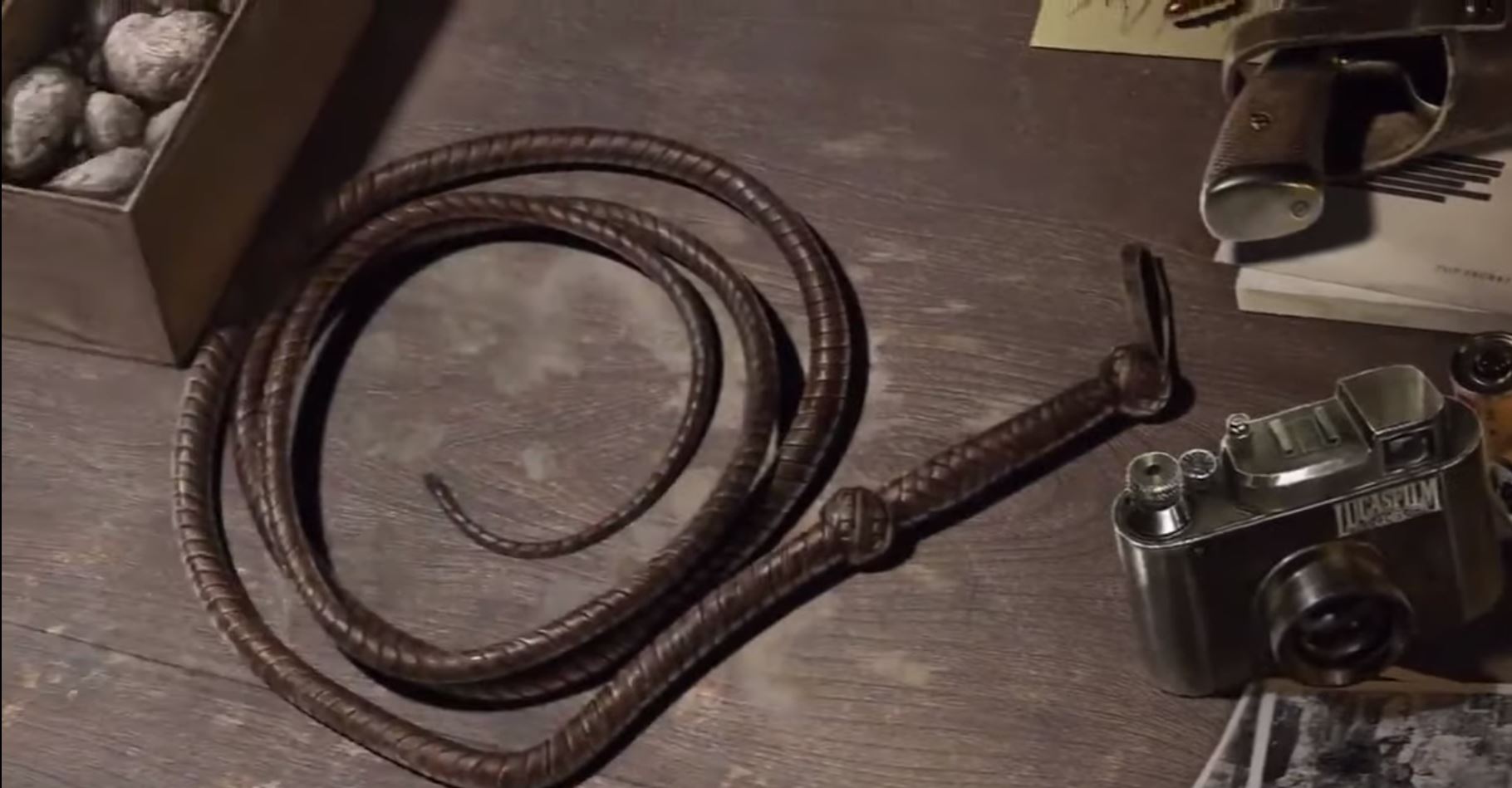 Just as we were getting over the shock of all the cat ears in that Bowser’s Fury trailer, we were blindsided by this tweet that reveals Wolfenstein developers MachineGames and publisher Bethesda are working on a new Indiana Jones game in association with the recently revived Lucasfilm Games brand.

While I’d love to talk about how this is the most exciting partnership between a game developer and brand since…well…IO and James Bond, we’re going to shelve that conversation for now and instead take a deeper dive into that brief teaser trailer in order to follow the clues and do Indiana Jones proud.

Here are the most noteworthy pieces of evidence that we’ve found in the teaser for MachineGames original Indiana Jones story.

The teaser trailer opens with a brief look at a series of books that all appear to be fictional.

However, that doesn’t mean there aren’t some potential clues to glean from them. For instance, one of the books is titled “Ancient Circle Jubilee.” Jubilee is a traditionally religious term that typically indicates a special anniversary (usually, a 50th anniversary). When capitalized (such as the phrase appears on the cover of the book), the phrase can signify a tradition that honors the emancipation of Hebrew slaves. The Roman Catholic Church also acknowledges a Year of Jubilee (or Holy Year), but that is based on a 25-year timeline. Keep that latter example in mind for a little while.

It’s also possible that there is some kind of meta meaning to the title. After all, the “author” of the book is Todd Howard: a famous Bethesda producer best known for his work on the Elder Scrolls series.

The only other noteworthy books we see are “Forbidden Stones” and an unnamed volume written by someone named Sir Francis. We don’t see the author’s full name clearly, but it’s easy to assume that it’s Sir Francis Drake, who was notably featured in the Uncharted games (which certainly paid homage to Indiana Jones). There’s also a book called “Myths That Made Us,” which we can only assume is an homage to the Netflix series of a similar name.

While it’s easy to overlook the coffee mug featured in the teaser trailer, it actually includes one of the more tantalizing clues in the preview.

The mug is emblazoned with the letters “MC,” which seem to be a reference to Marshall College: one of the universities that Jones taught at.

Why is that significant? Well, it’s believed that Jones starting teaching at Marshall College sometime around 1925. While the expanded Indiana Jones lore suggests Jones briefly left the College in 1933 to teach at Princeton, he returned to the school in 1935 (this is where Jones was teaching at the beginning of Raiders of the Lost Ark). Jones seemingly leaves Marshall again in 1938, but he returns to the school sometime in the 1950s.

What does this tell us? Potentially nothing, but assuming that the game will honor the existing lore (and that Indiana Jones is using the mug while actually teaching at the university), then it could offer us some rough timelines of when the game’s story occurs.

The Vatican and Mesopotamia Maps

Two of the trailer’s clearest and most fascinating clues can be found in the briefly showcased maps and drawings.

The first map (or sketch) features the words “Ziggurat Clue?” Those words (and the drawing) are almost certainly a reference to a style of building popular in ancient Mesopotamia. Today, Mesopotamia is found in a large section of the Middle East that includes Iraq, Kuwait, regions of Syria, and more.

Next to that sketch is a map of Vatican City. Location possibilities aside, the presence of that map could certainly suggest that this Indiana Jones game will echo Jones’ most famous adventures by once again dealing with the pursuit of a religious artifact. Let’s also not forget that the phrase “Jubilee” is associated with the Roman Catholic Church.

It’s not entirely clear how those two locations may be related to each other, but again, they do hint at location possibilities as well as some potentially interesting mythological implications.

By far the most interesting piece of evidence featured in the trailer is also one that’s easy to overlook at a glance.

Yes, I’m talking about what appears to be a plane ticket located next to Indiana Jones’ passport. It’s an orange piece of paper that seems to have been purchased for “Overnight Service to Rome.” More importantly, the ticket features the date “October 21, 1937.”

Notice a year missing? Even if you look at the extended adventures of Indiana Jones, there doesn’t seem to be a clear record of what he was up to in 1937. That year would also match the timeline of Jones’ time at Marshall College, which we alluded to above.

For the moment, the popular theory is that this game will take place in 1937. However, it’s certainly possible that the ticket is just a memento from one of Jones’ other adventures.

The final potentially notable piece of evidence featured in the trailer is also the most mysterious.

Underneath the Lucasfilm Games camera, we see two photos of what appear to be ancient ruins. To be honest, I don’t know what locations these photos could be referencing. Readers?

Equally interesting is the piece of paper located above the photographs that includes the words “Top Secret.” That would seem to suggest that Indiana Jones could be on another government mission, although we again have to bring up the possibility that this is a souvenir from some other adventure.

Did you spot any other clues in the Indiana Jones trailer? Let us know about them in the comments below.

WandaVision May Have Already Shown Us Its Doctor Strange 2 Connection
From Lupin III to Inspector Gadget: Examining the Heirs of Arsène Lupin
Morbius Delay Should Not Affect Spider-Man 3’s Spider-Verse Story
Resident Evil Village Maiden Demo: All the Clues You May Have Missed
Servant Season 2: What is the Test of Leprosy?