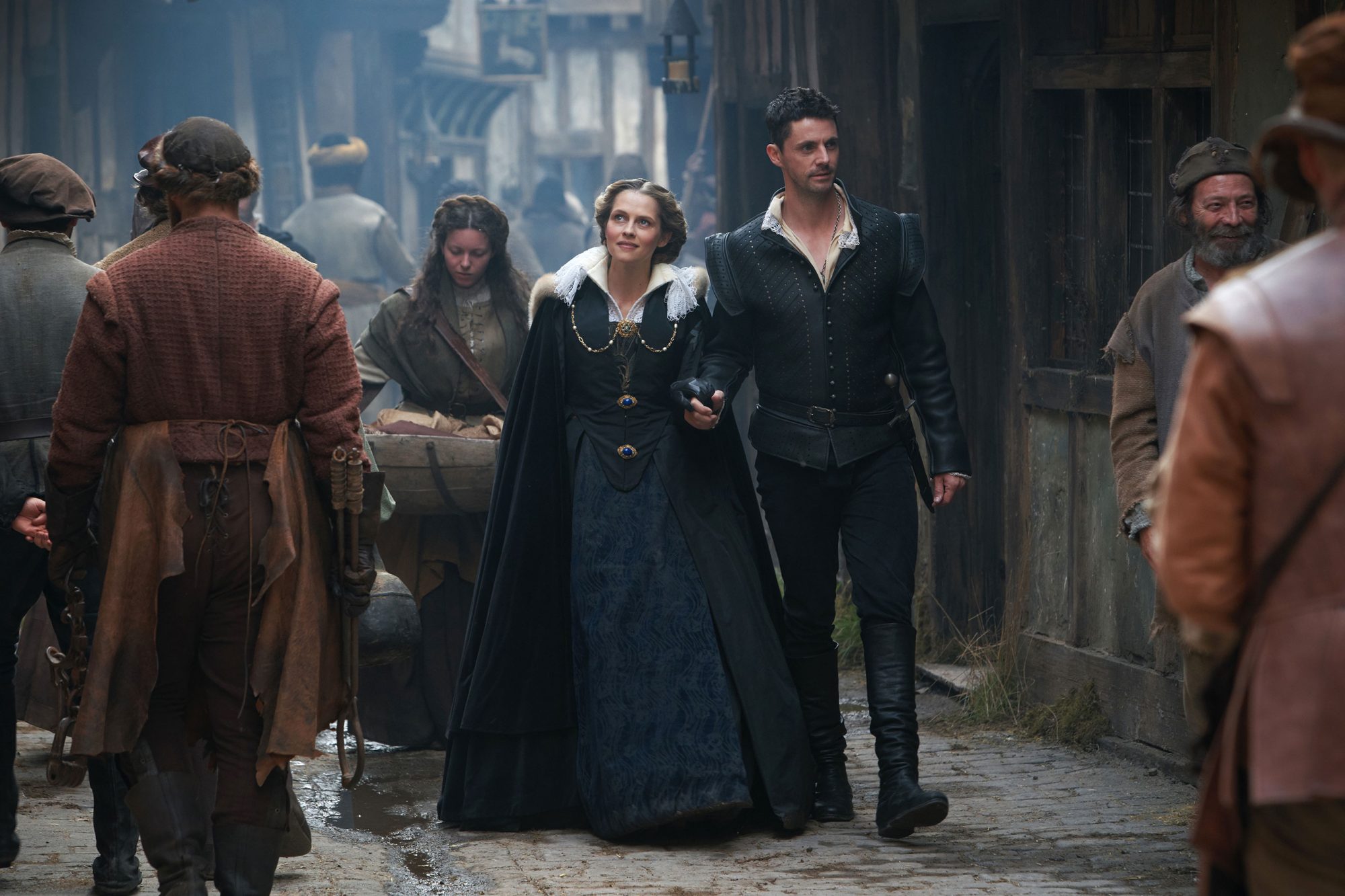 If the first season of A Discovery of Witches was like cooler, sexier Twilight for grown ups then season two might be likened to the later, less sexy installments of that saga. There’s nothing that ruins a fizzy will-they-won’t-they relationship like the couple getting together and being happily in love.

Season two finds our protagonists witch Diana (Teresa Palmer) and vampire Matthew (Matthew Goode) hiding in time. Just beginning to get a handle on her considerable powers, Diana has discovered she’s a ‘timewalker’ and has transporter her and Matthew back to Elizabethan era London where the two plan to search for The Book Of Life, or Ashmole 782, the ancient text which is said to contain the secrets of witches, vampires and demons and may help to explain why these creatures’ power is diminished in the modern day (the major concern of season one).

This Elizabethan setting allows a host of real life historical characters to be brought into play including Christopher ‘Kit’ Marlowe the playwright who in this universe is a demon. History buffs and fans of Elizabethan literature should get a kick out of this alt timeline, though some might find the references a bit ‘clever-clever’ (if you found Shakespeare in Love hilarious you’ll probably be fine).

Matthew’s character is distinctly more at home here than Diana’s (which makes logical sense because Matthew lived through this era once already and is reunited with old friends) but it does mean that at times Diana struggles for agency. Instead she and Matthew bicker about who is protecting whom as he urges her to stay hidden for her own safety, and she gets roundly insulted by everyone.

Diana is looking for a witchy teacher to help her hone her powers (which she will need to do if they are ever to return to their own time) and scenes of her with a new found coven are perhaps the strongest, as this collection of women (headed up by the amazing Dame Sheila Hancock) coaxes Diana to realize what she is capable of.

As with the first season, Witches 2 is epic and sumptuous in its cinematography and settings and does just as much globetrotting too.  Add in scenes set in the modern world Matthew and Diana have left behind and the scale feels bigger still, but also less focused.

With Matthew juggling the political machinations of church and the royal court, as well as trying to disguise that he’s a future version of himself and convincing his old chums he’s not lost his mind because he’s hanging out with a witch, there’s a lot going on for the couple. And that’s even without the contemporary power play ticking along with The Congregation, The Knights Of Lazarus and Ysabeau de Clermont (Lindsay Duncan) who is housing Diana’s aunts (both witches), as well as demon couple Nathaniel and Sophie who are having a baby which might just be a witch.

It also means young vamp Marcus (Edward Bluemel), Matthew’s ‘son’, doesn’t get as much screen time as we’d like – he’s a bit of light relief in a show which in season two has a tendency to be a bit serious and overblown – so much so that his subplot in the show feels like a breath of fresh air after the muddy mustiness of ye olde London.

Matthew Goode is good as Matthew and this period setting suits him well, but aside from the lovely witchy bits the show seems a whole lot less fun for Palmer. Upholstered in the most complicated, cumbersome and restrictive of dresses and surrounded for the most part by a bunch of blokes who don’t trust her she spends much of the series attempting to placate Matthew’s former social circle. That’s when the two aren’t pledging eternal love to one another and not having sex. Being the smartest woman in Oxford looked a whole lot more appealing.

Characters from Matthew’s past surface later in the series to fill in some interesting gaps in his personal history, and the mystery and mythology of witches, demons and vampires is expanded so die hard fans of the show should have plenty to get their teeth into. Casual viewers who were here for the sartorial style, sizzling sexual tension and supernatural hi-jinx might find A Discovery of Witches season two all just a touch dour.