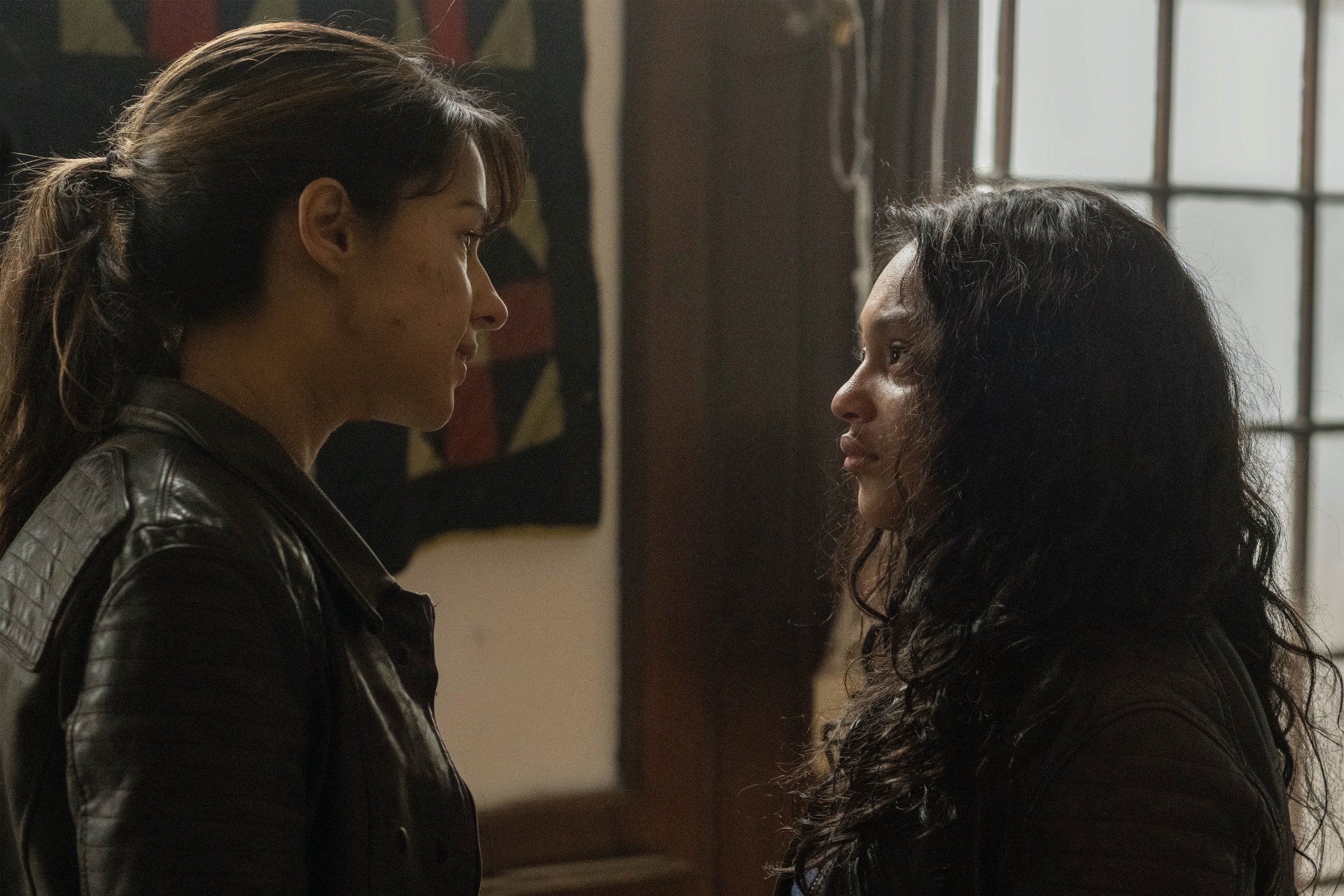 This The Walking Dead: World Beyond feature contains spoilers.

With The Walking Dead: World Beyond only getting a two season run, there’s a certain expected economy of storytelling. There’s not an opportunity to drag anything out past a few episodes, so big reveals tend to come faster and character arcs tend to bend more quickly than they might on other programs with more hours to fill and more opportunity for long-form stories. As such, there’s a lot of stuff that changed during the two-episode finale event to drill down into. Here is what happens in the conclusion of The Walking Dead: World Beyond season 1’s final episode.

Witness the transition of Huck, shifting from faithful friend to antagonist in the span of an hour and a half or so of screen-time. The show doesn’t waste time with her reveals, though it’s lampshaded with a discussion of her cover story being too flimsy for prolonged activity. When Huck starts to turn, she turns immediately, and no amount of attempting to cover for herself (or Hope’s lame attempts to play along) can change the fact that something hasn’t been right about Huck for awhile.

Her story begins the fall apart the moment she starts trying to work on Iris rather than focusing her attention on Hope. Iris, recently bamboozled by Percy, is naturally suspicious of Huck when she wants to be friends all of a sudden and pushes to leave Felix behind where before she was all about the group staying together.

As it turns out, Huck’s back story may or may not be genuine, but the way she ended up in Omaha prior to joining Campus Colony almost certainly was fake. In fact, Huck AKA Jennifer is actually the daughter that Elizabeth mentioned in the very first episode, and was sent on a secret mission to infiltrate Campus Colony personally by her mother. Hence all the resources Elizabeth is willing to expend to make sure that her daughter’s mission comes off successfully.

Was Huck a Marine? Possibly! Was that whole flashback episode involving Huck’s origin story just created out of whole cloth by Huck to obfuscate her background? Probably not; it seems like it would be in Huck’s character to do anything for the greater good, and to her, retrieving assets from Campus Colony is the greatest of goods. Huck says in her conversation with Elizabeth during one of her ‘scouting trips’ away from the group that her facial scar, the broken arm, spending nine days on a raft, her mother giving Iris a map to her father’s CRM base of operations… all of it was part of the plan to ingratiate herself into Campus Colony and retrieve the asset. What asset?

Hope For the Future of Humanity

Of all the people in Campus Colony (a former college where Ph.D.s do everything from interviewing newcomers to growing food) Hope is the asset that Huck has been sent to retrieve. According to her father, she’s a mechanical genius, with a natural gift to repair broken technology and something of a child prodigy at both taking things apart and putting them back together. She also makes a mean batch of home-brew booze, but that’s less necessary than someone with technical skills. While preparing for dinner with Leo, Dr. Lyla Bellshaw—you might recognize her as the mysterious scientist doing experiments in the post-credits sequence of Episode 4—explains that Elton’s Endlings theory is correct. There are only about 30 years left in which humanity will be able to stop the slide into extinction, so people with gifts like Hope’s are worth a thousand security guards and are worth any price to retrieve and preserve.

Of course, while Hope is smart, it takes two Bennett sisters to really pull off the sort of magic Leo proudly talks about, not that Leo knows that. Hope, the mad genius, willingly climbs onto a helicopter headed towards parts unknown, where she might end up being joined by none other than…

The Fate of Silas Plaskett

Elton proves, beyond all shadow of a doubt, that Silas might be large, but he doesn’t have the capacity for violence that is assumed when Tony is found with his head pulped by a wrench. That’s just a cover. The gravely wounded Percy reveals to Elton in a pretty fun sequence in the season finale that Huck, not Silas, is the person responsible for Tony’s death. I’d hope Elton had already figured that out when he saw the small-caliber bullet wound in Percy, but it’s nice to have confirmation. Huck was trying to delay the group’s arrival to Ithaca to work on getting Hope to go along willingly, and two friendly grifters with access to a deuce and a half aren’t part of that plan.

The asset is all that matters; everyone else is expendable, and Silas is a convenient way to sow dissent in the ranks of the group (picking up Felix’s plan for getting them to turn back, but making it infinitely more effective). Silas turns himself into the CRM to allow Elton and Percy to escape into the woods. Given Silas’s ability with mechanical things, he’ll be a natural fit to work alongside Hope in whatever steam plant the CRM depends on to keep the lights on and the re-runs on TV.

Will and the Hooded Figures

Will has been mentioned a lot throughout World Beyond, in the context of being one of Campus Colony’s security force, serving as Dr. Leo Bennett’s security guard on his mission to the CRM, and as being Felix’s boyfriend. However, the first time he’s seen on screen is in 1.09’s post-credits sequence, fleeing for his life from a CRM hit squad. As far as Leo knows, Will just a few days late coming back from a scouting trip, but Felix and Iris know better. After a menacing stare-down in the woods, Felix and Iris watch as Will drops his hood and steps into the clearing for hugs and tears all around. It’s a nice moment, to be sure, but it’s made all the more reassuring because Will isn’t alone. He’s got a half-dozen or more people lurking in the shadows with him, and while those hooded figures don’t step forward and introduce themselves, it’s clear from the fact that Will is alive, they’re not Civic Republic Militia. If the organization is willing to kill hundreds of people to get one or two, then there’s no question that they’ve left behind enemies. Lots of enemies, and given that the enemies are so close to the CRM’s current base of operations, it wouldn’t be a huge surprise if the very same woods Percy and Elton escaped into are the very same woods where Felix and Iris ran into Will and his mystery partners.

You don’t introduce an outside agitator group and not use them. Will and his friends are clearly the core of an armed resistance to the CRM. Similarly, you don’t put a core of sympathetic people on the inside and not have that come back into play. There isn’t a real end to season one to be found in World Beyond‘s final episodes, but instead, they’re focused on kicking off season two with the potential for immediate action.