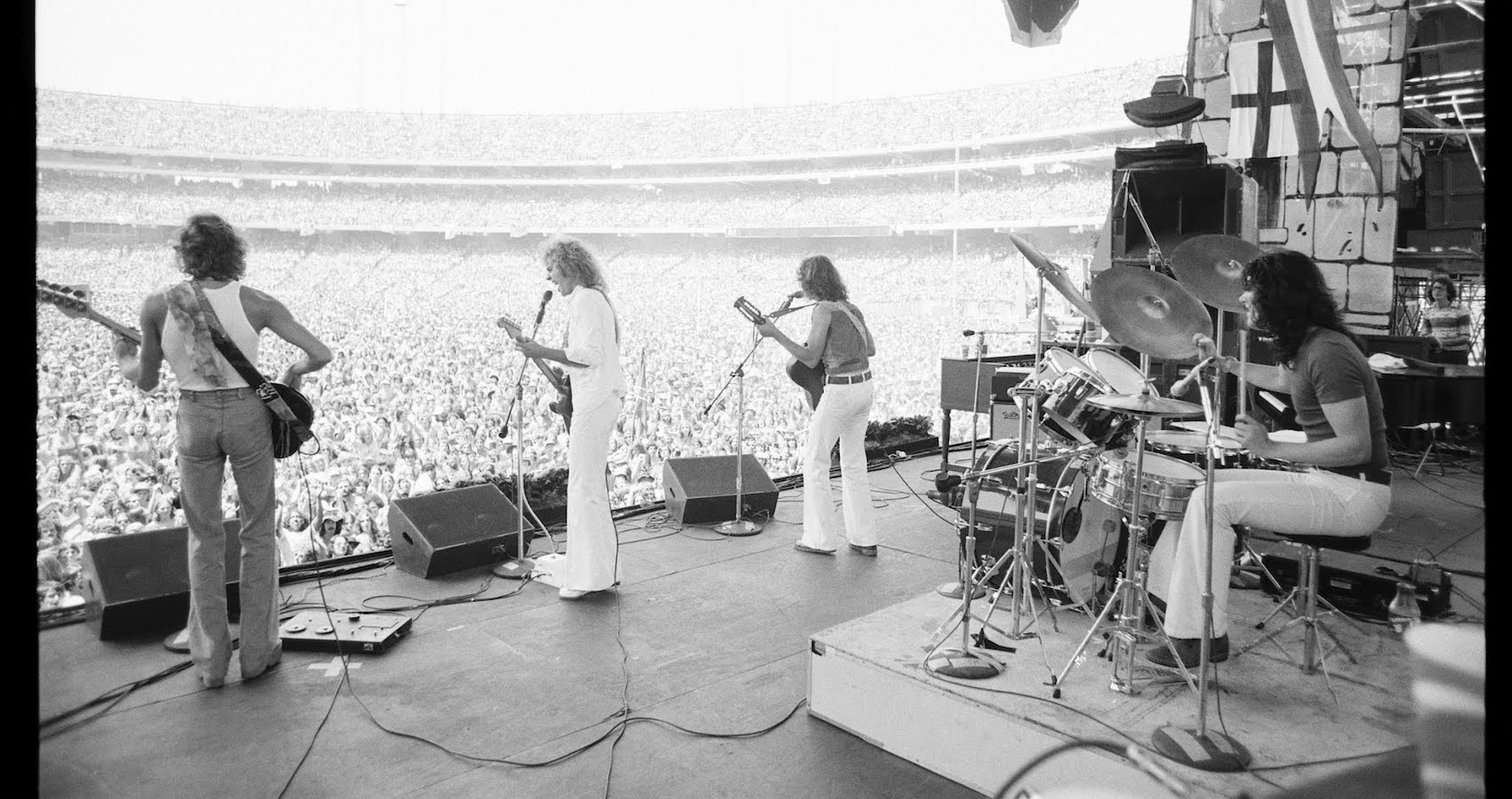 Just to count it off, Peter Frampton’s Do You Feel Like I Do? A Memoir is as much fun as hearing a talking box guitar solo for the first time. Live and with an audience, of course. Each of Frampton’s best-known albums, either with his bands like Humble Pie or in his solo career, are live records. He may also love the studio albums he made, but just like The Who, whose studio albums he loves, those records are a different breed from a live show. Frampton should know, one of the first gigs he ever got was touring as an opening act for The Who.

And, as much fun as they were to see on stage, even their live shows paled when compared to ducking bottle rockets Keith Moon and John Entwistle aimed into his motel windows between shows. Frampton had fun, and it comes across on the pages of Do You Feel Like I Do?

While still in the school era of the book, Frampton talks about going nuts when he first got to jump on a trampoline. He was the first in his class to do a somersault, and then a backwards somersault. It got him shoved into a crate, but it sounds like a blast. Almost as exciting as meeting a young David Jones at school. No, not the Monkee, the one who had to change his name because of the Monkees: David Bowie, who remembered seeing Frampton in a band on TV before he had a hit.

Bowie was a few years older than Frampton and his recollection of seeing the young guitarist he jammed with outside his favorite teacher’s office was “what’s he doing on TV? He should be in school.” Frampton’s father, the teacher Bowie loitered with, initially agreed. Frampton left school early to go pro as a musician. Years later, when Frampton brought his parents backstage to a Bowie concert, his father disappeared with the Thin White Duke. The stories make you grin. They are exactly the kind of rock and roll parables we want to hear from musicians.

That’s not to say Frampton doesn’t foist some stories we would never have expected. Like one about his father in the war, the details of which you have to read to believe. It’s not the kind of thing you want to know happens in reality. But you won’t stop reading it, not even if you’re just looking for the rock and roll gossip. There are a few of these stories thrown in, and Frampton is upfront about his drinking and drugging. He even explains why it took him so long to take his first toke. The very smell of some of the shit Steve Marriott smoked made him want to throw up. That didn’t stop him from getting high though. Nonetheless, the book doesn’t dwell in sadness.

It dwells on guitars, and jubilantly. Frampton’s favorite guitar, the Phenix, a modified 1954 Gibson Les Paul Black Beauty with the same three-humbucking-pickup configuration as the guitarist in Smokey Robinson’s Miracles, gets a book in itself. The ode of the Phenix could be a miniseries. Guitarists would watch. But that’s not the only guitar that the mostly monogamous Frampton fingered. He talks about seeing the set list still taped on the back of John Lennon’s red Rickenbacker when he played for Harry Nilsson. He was the first person to touch the guitar since whatever show the set list fit.

Frampton’s journey through the guitar is as interesting as his trek through life. Oh, and just hearing how everyone in Humble Pie was a Star Trek fan is a giggle, especially as they discuss Spock’s ears. But Frampton’s mission to seek out new sounds led him through from The Shadows to Django Reinhardt, through George Benson, and back to Kenny Burrell, giving him an arsenal of tonalities Eric Clapton didn’t touch. Everyone wanted to be Clapton, except Frampton who makes it clear he wanted his guitar sound to be uniquely his. He also talks about drums and filling in for drummers who don’t show. He talks about the balls of covering Stevie Wonder songs. He makes it all sound like a dream.

Great musicians refer to respected peers as motherfuckers, and the one thing anyone who’s ever pushed a beat or a melody out of their fingers or throat will agree on is Peter Frampton was one lucky motherfucker. He could play, he took in everything he heard so that he could do whatever it was he wasn’t hearing from other guitarists and made it his own. But he had the good fortune to play with the best, and at the earliest of ages. Before he could even get into clubs he was playing them. Bill Wyman of the Rolling Stones asked Frampton’s mother permission so he could play. He didn’t ask permission to get Frampton laid though, but when the teenaged guitar wiz came home with crabs, his mother took it in stride. Musicians, it’s an occupational hazard.

Frampton released Frampton Comes Alive! nearly 45 years ago. It’s always been thought that the album made him a pinup. He’s fought this all his career, since he was named the “Face of 1968” as an 18-year old guitarist/singer for the rock-poppy band the Herd. Sure, he got laughed at a few times for one-sleeved shirts with frills on the crotch, long before he put on the Sgt. Pepper’s Lonely Hearts Club Band uniforms for an ill-advised movie where the Bee Gees also carried that weight. Frampton didn’t want to be Vivien Leigh, so beautiful you forget what a phenomenal actress she is.

Peter is a musician, and a lot of artists owe him a big debt, not only because of his fretwork influence. He gleefully recounts Dr. John telling him how he got out of jail on a drug charge with the money he earned when Frampton recorded his song “I Walk on Gilded Splinters.” Keith Richards of the Rolling Stones thanked Frampton for including “Jumping Jack Flash” on the gazillion-seller Frampton Comes Alive! He bought a house with the royalties.

As sad as the circumstances, it is a joy to hear how other rock stars come to collect. Frampton recalls when his career was in a slump and he got a phone call from Pete Townshend. The Who’s guitarist and songwriter was sick of touring and asked Frampton to take his place, before even consulting Roger Daltrey. Frampton says he told Townshend he couldn’t fill his shoes, but think of the fun Frampton had on the trampoline. Townshend was known as “Bouncy” in the “Meaty,” “Beaty” “Big” and “Bouncy” quartet. He jumped higher than Daltrey’s shoulders, often in self-defense to get away from the swinging mic, but still. Frampton could have made the leap.

The era of Humble Pie, which also included ex-Spooky Tooth bassist Greg Ridley and drummer Jerry Shirley, is also where producer Frampton really gets to work with Glyn Johns. They’d had a happy history, and it continues through the Humble Pie albums Rock On and Rockin’ the Fillmore, which made them huge when it came out in the fall of 1971. So big, Frampton had to jump ship onto a solo career before he’d never be able to get out.

Frampton keeps the telling light, but is absolutely candid. He never thought he could be as good a singer as Steve Marriott, who had been in the Small Faces, but at least he’d know enough not to balk at opening Jimi Hendrix on his first American tour. Frampton also explains how he went from one Johns brother to another as he embarked on his solo career.

Oh, and the book’s got mob stories. Not quite as heavy as the ones surrounding Led Zeppelin, who Frampton credits with a sonic boom as great as the Beatles’ Sgt. Pepper, but suspenseful nonetheless. His manager Dee Anthony has a meeting with Genovese family soldier Joey Pagano in front of Frampton, and when the rock star became a pop idol, he was kept high, happy and distracted. Frampton had no idea he was totally bankrupt until the movie Sgt. Pepper’s Lonely Hearts Club Band bombed at the box office. The only reason Frampton did Sgt Pepper was because his manager said Paul McCartney would be in it.

Frampton can’t quite say enough about his school chum Bowie. Not only did Frampton credit the older musician with a few needed pushes, gigs, and music store jobs when he was coming up, but Bowie reenergized Frampton when he was running out of steam. In 1987 Frampton played guitar on Bowie’s Glass Spider world tour. Two years later, Frampton comes back with a vengeance, which happens, as he says, on the album title When All the Pieces Fit.

Many will see this book as an example of rock stardom gone wrong. But as a reader, it really is what we want to hear, except for the inflammatory muscle disease, Inclusion-Body Myositis, which threatens to end his career as a live performer.

Frampton’s still working, and the book, co-written with Alan Light, is as happy to say it as fans will be to read it. But more than fans, most musicians should read this, not because of any cautionary tale titillation. Because of his explanation of how he found his sound, the horns Frampton listens to, the piano parts he plays and appreciates in others. Yes, the most fun are stories like having a Beatle (Ringo Starr), an honorary Beatle (Billy Preston), and a long-time Beatle artist and an alternative bassist (Klaus Vorman) backing him at a music pitch; or being told by George Harrison he’d like to hear him on every track. But for musicians, Do You Feel Like I Do? rocks loudest when he speaks about what he’s playing. Imagine it coming out of a talk box. It’s that enjoyable.

Do You Feel Like I Do? hits bookshelves on Oct. 20, from Hachette Books.

What The Mandalorian Means for Ahsoka Tano’s Future in Star Wars
How Darlene Love Brings the Holiday Spirit and Soul to The Christmas Chronicles 2
Funko Gift Guide: Best Funko Pop Figures and Toys for the Holidays
DC Nation – The Riddler – “Riddle Me This” (full)
Batman/Catwoman Brings Back a Second Villain from The Animated Series