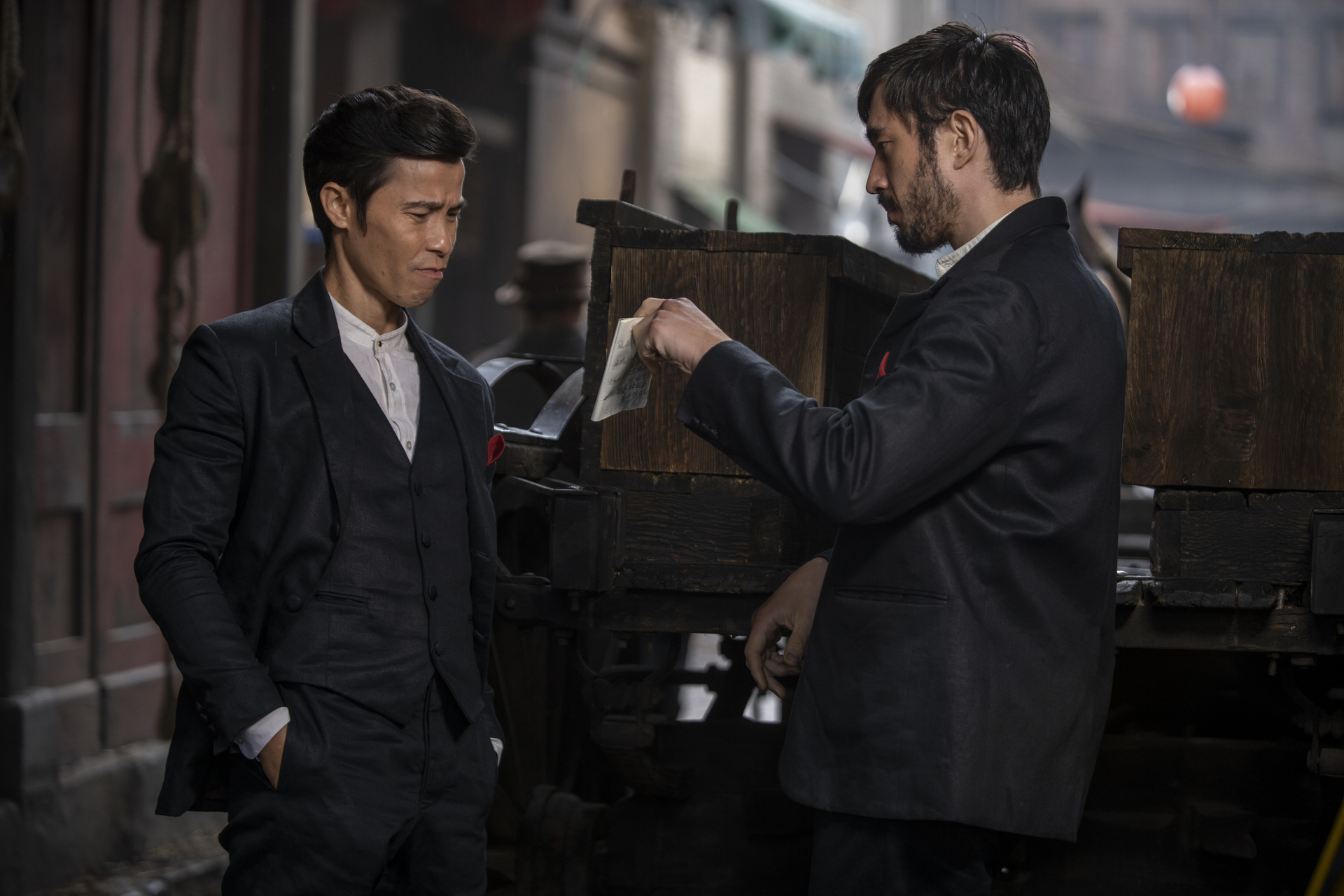 “Not How We Do Business” sums up the latest episode of Warrior in two ways. First, it’s a line that Zing (Dustin Nguyen) lays on O’Hara (Kieran Biew) when he finally breaks away from being a debt collector for the Fung Hai. “Not how we do business” also works on a meta level, this episode only has one Kung Fu fight. That’s weak for a Bruce Lee inspired show. There are two other fight scenes, but they’re scrappy brawls the likes of which can be found in any action drama.

Bruce Lee fans want Kung Fu, and not just any Kung Fu. As part of the Little Dragon’s legacy, it must be great Kung Fu. The lone Kung Fu scene in this episode is good and serves to introduce a pivotal new character, but that’s not enough. It’s not how we do business.

This episode begins with a missed opportunity where Ah Sahm (Anthony Koji) is in the Barbary Coast Fight Pit, facing off against another challenger. That would be great, but the fight is already over. The opening shot focuses upon his burly challenger, but he has already been knocked out and is just standing stunned, then there’s a shot of Ah Sahm, and then the challenger falls.

Seriously? No Kung Fu? Starting in the Fight Pit is fine dramatically but shortchanging the audience out of a fight is not the way to go for this show. It’s a big ripe piece of low hanging fruit left to rot. Bruce Lee fans crave gratuitous Kung Fu. Whenever Warrior goes to the Fight Pit, there had better be a fight.

After that, Ah Sahm’s fight manager Vega (Maria-Elena Laas) teases him with the promise of a bigger purse in some other international arena, a place where Warrior will hopefully go at some point this season, but not in this episode. Chao (Hoon Lee) pulls Ah Sahm aside and implies that he knows about the molasses plot that he and Young Jun (Jason Tobin) are cooking up, and that he’s concerned over Ah Sahm’s rivalry with Mai Ling (Dianne Doan). Chao comments “I don’t see any version of that ending well” which comes as no surprise to anyone. If this all ended well, there’d be no fight scenes.

Enter Hong – the New Guy in the Hop Wei

The centerpiece of the episode is the introduction of a new character, Hong (Chen Tang). Chen Tang just portrayed Yao in the new Mulan. In the original Disney animated film, Yao was Mulan’s hard ass comrade, and in contrast, he’s the shortest character (unless you count Mushu and Cri-Kee). The live action Mulan changed a lot – Yao was still the hard ass, but now he’s 6 feet tall and a less significant role. Nevertheless, Chen is a great addition to Warrior, exuding a southern charm because he was raised in Memphis and has a natural southern accent in real life, but he covers that up for Warrior.

Hong arrives ‘fresh off the boat’ with a batch of new recruits, hatchet men ordered from China by Father Jun (Perry Yung). Their appearance makes Young Jun nervous that Father Jun might be on to his non-Chinese molasses scheme. He’s also suspicious of Hong’s attempts to weasel his way in with them. Nonetheless, Young Jun and Ah Sahm agree to take Hong to a brothel. There Ah Sahm discovers Hong is gay but sympathetically keeps that secret.

After that, the threesome stumble across some Fung Hai gangsters in the streets and Hong, either eager to impress or just hungry to kick some ass, takes them all out by himself. It’s a good introduction and reveals his expertise with whip chain. A whip chain is a traditional Chinese weapon, one that can be easily concealed as a trusty everyday carry for a Tong man. Chen Tong delivers a decent first fight scene with it. As weapons go, the whip chain requires more skill to wield than a nunchaku. Hong deploys both the whip chain’s striking and entangling methods proficiently, although the scene is in a dark alley and the shadows can conceal a multitude of sins. Chen Tong lists skills in Stage Combat, Karate, Kung Fu and Tai Chi on his resume and claims he did some preparation for the role of Hong studying Chinese whip chain and the Japanese equivalent manriki-gusari.

One of the best things about Warrior is the relationship between Ah Sahm and Young Jun. They have an earnest chemistry as two gangsters being gangsters, delivering beat downs, slinging molasses, and chasing sticky. This camaraderie is commonplace for buddy films and TV partners but it’s exceedingly rare and delightfully refreshing to see this for two Asian men in a Western production. Both Ah Sahm and Young Jun have a lot to prove and their connection is palpable. Hong brings a new lighter tone as the third wheel to their partnership. They already seem to be bonding as a threesome which is promising for the rest of the season.

In the Room Where It Happens

Mai Ling (Dianne Doan) and Li Yong (Joe Taslim) pay a visit to the Fung Hai lair so she can scold Zing (Dustin Nguyen). Walking into Zing’s room is a gutsy move for Mai Ling, but with Li Yong at her side, she’s fearless. Zing agrees to Mai Ling’s terms, but not before she shares a ritual drink of mare’s milk with him. Mare’s milk, or Kumis, is a unique fermented drink because few alcoholic beverages are dairy derived. It’s usually not that strong, nor is it the disgusting chunky chowder depicted in Warrior but the Mongols are stereotyped as barbarians, just as they were in Mulan, so it’s depicted as revolting. Mongolians are poorly represented in film and television. Project their media depictions upon any other race and the generally disparaging tone is evident.

On the way out, a Fung Hai thug gets up in Li Yong’s face and gets throat punched for his trouble. Don’t mess witjj Li Yong. Knowing Li Yong could destroy his crew, Zing calls off his man saying “Be thankful for your pain. It means you’re still alive.”

Much to Li Yong’s dismay, Mai Ling echoes this line towards the end of the episode, making him wonder if his boss is headed down the wrong path like Zing. While everyone in Warrior has their dark side, Zing has emerged as the villain with no redeemable qualities. Taslim brings a guarded nobility to Li Yong as Warrior’s most badass fighter; he’s loyal to Mai Ling, his lover and boss, but not blindly so. This, along with Taslim’s martial expertise, makes Li Yong one of the more intriguing characters. Mai Ling, like most of the rest of the cast, is another character with a lot to prove.

Later, Zing, being the barbarous Mongol villain, threatens Chao (Hoon Lee) over delivering weapons. Chao, always the manipulator, discusses Zing with Mai Ling. Then later, Chao meets with Li Yong alone. Over bowls of noodles, Chao proposes a way to avoid war, teasing some coming intrigue to take Zing down. Everyone is aligning against Zing and the anticipation of this inevitable showdown is promising.

Sophie (Celine Buckens) sneaks into Leary’s (Dean Jagger) back room at the Banshee and finds his map of factories that use coolies. While she’s smart enough to realize that Leary is behind the factory firebombing, she somehow overlooks that Mercer Steel has got to be among those circled on that map too. Clearly her sister’s company is on the Irish workers hit list because they were beating up the coolies headed to Mercer until Penny (Joanna Vanderham) hired the Hop Wei for protection against them. Sophie and Leary finally hook up and Leary unwittingly echoes Chao saying, “This isn’t going to end well.” By now, the audience is well aware it’s not going to end well and has their collective fingers crossed that it will end in a massive Kung Fu fight at the very least.

As they have a post-coital stroll, Sophie suggests that Leary get into politics with a nod to Hamilton by suggesting he should “be in the room where it happens.” Leary calls Sophie out when she says she “knows.” She’s an entitled upper-class woman and hasn’t seen the tragedy that Leary has. He tells Sophie of some of the horrors he witnesses, of friends and family starving, and starts to pull away from her until she draws him back. It gives Leary more context.

Given the era, Leary likely escaped the Great Irish Famine (1945-1849). Over a quarter million Irish emigrated to the New World and Leary would be part of that generation. The Irish are struggling too. During that period, Irish immigrants made up most of San Francisco’s working class and about one-third of the city’s population. This is another way Warrior sheds light upon a dark period of history.

The other two fight scenes come from the cops. The first is short. Lee (Tom Weston-Jones) returns to Nora’s (Gaosi Raditholo) tavern where he got rolled last episode to exact revenge. He goes full copper, night-sticking and shooting up the joint until he gets his cash back. With Lee, Weston-Jones is echoing his role as Kevin “Corky” Corcoran, in his previous TV show Copper. Corky was an Irish detective in a period drama set in the late 18th century, the same era as Warrior. This is not so much of a bar fight as it is a cop taking out a few unarmed barflies.

When a debtor’s wife flashes a gratuitous boob at O’Hara, offering him sex to pay her husband’s bills to the Fung Hai, it’s the last straw and he finally quits the Fung Hai. Even though O’Hara has repaid his debt, Zing exacts revenge by sending Tong men to invade his home and threaten his family. This happens right after dinner where Lee had been their guest. Lee comes to the rescue, revolver blazing, and a scrappy bit of violence ensues where O’Hara’s son and wife must defend themselves too. It’s a brutal sanguineous scene, leaving everyone dead or splattered with blood, ending this episode in a bloody mess.

Warrior Season 2 can be seen exclusively on CINEMAX.