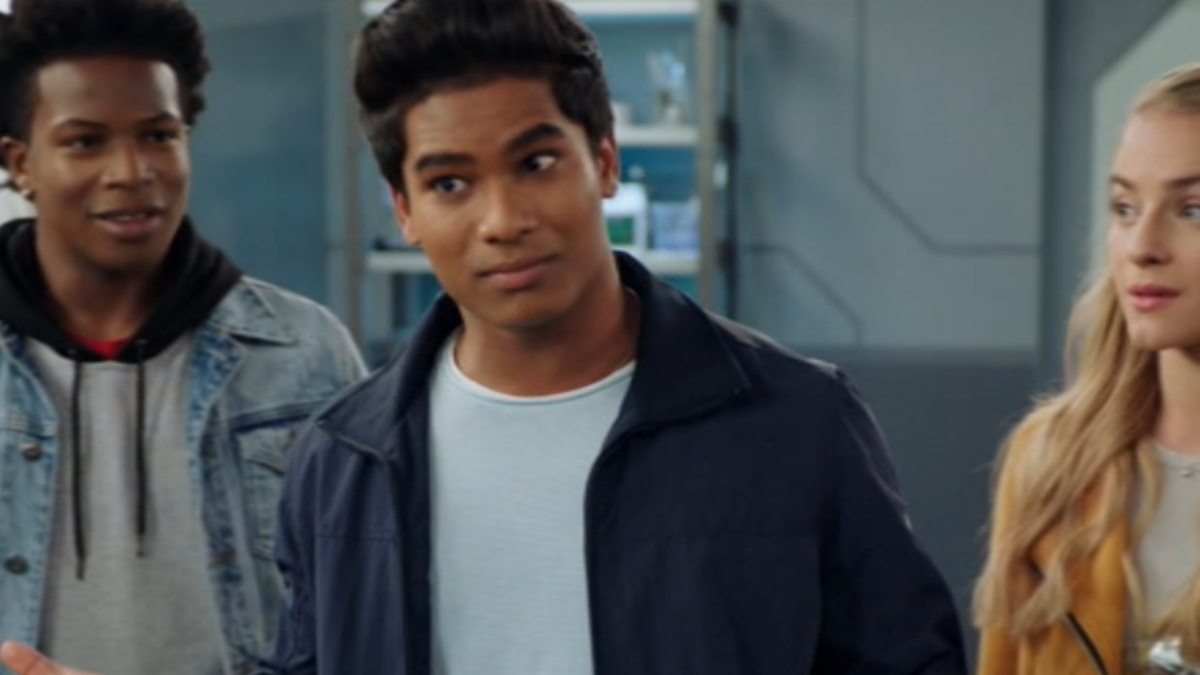 For an episode filled with clips from the past the most Power Rangers thing to happen is actually the B plot with the Rangers tracking down a diamond thief. Mostly because there are five diamond stores in Coral Harbor and they have names that all go in alphabetical order for A to E.

That is so cheesy and perfectly Power Rangers. Of course the city would have diamond stores in alphabetical order! Obviously! I love that it’s a huge part of this B plot and Jazz Baduwalia is just having the time of his life playing detective as Ravi. He’s chewing the scenery with his sleuthing and I wish we got to see this more playful side to the character. The rest of the cast is also having a blast, with some of the best and most Power Ranger-y one liners in awhile.

“He wants thousands of them!”
“Well we want zero of you.”

“It was nice to meet you, but it’s time to defeat you.”

And my favorite dialogue exchange of the episode,

That “aw” was perfectly delivered! Steel has always been a gem (zing) but that little “aw” packed so much character and comedy into less than second. Steel got a bunch of great lines this episode, from wanting to be able to eat and drink to misinterpreting Devon telling him he’d kick his butt. The more Steel you have in an episode, the better!

Poisandra and Curio even got some great bits in as they tried to take all the diamonds.

Curio, you deserved to get more focus in Dino Charge.

The whole thing was perfectly in character for the two and it tied into the plot well! A great way to use the footage from the Sentai movie they’ve been adapting and get the Dino Charge villains out of the story by the end.

The A story is a clip show that does have a good framing device of the villains trying to figure which villain they should bring back. It’s a much stronger framing device than we’re used to and the commentary from the rogue’s gallery is pretty solid. Roxy being disgusted at looking up to Astronema, Scrozzle being sad about robots being blown up after watching Mondo’s death, and best of all? Goldar utterly annihilating Sledge. Sledge has always been a loveable loser of a main villain so seeing him get so thoroughly beaten was incredibly satisfying.

Less so were the clips themselves. I think they made some decent choices, leading with Mystic Force was a nice surprise, but I can’t look past the new dubbing. Instead of simply using the old clips they redubbed them all. For Mystic Force this worked and you wouldn’t even know it was different unless you watched them both back to back multiple times. They got the original actors for Koragg and Leanbow back and the sound alike for Udonna was perfect.

The clips for Astronema, Zedd, the Red Pyscho Ranger, and Goldar though did not work. None of them sound close, Zedd especially. It becomes comical as the episode goes on and it completely takes you out of it. I’m sure there’s a reason why they didn’t use the original audio clips but the new dubbing makes it feel cheap. Why not get Barbara Goodson or Kerrigan Mahan back if you somehow couldn’t salvage the old audio? What’s Christopher Khayman Lee doing? Bring him in for a minute!

I have no doubt it all came down to time and budget but if you’re going to do a tribute to the past cutting corners undercuts your efforts. This isn’t the place where you should be pinching pennies; this is where you do a couple Sentai footage heavy episodes to allow you to go all out. If you’re doing an episode “for the fans” they’re the ones who are going to notice these kinds of errors from the jump. You should be celebrating all the best parts of the past… not bad ones like underpaying your talent. (Friendly reminder Power Rangers built its success on exploiting non-union workers.)

The idea of the clip show was fine but the execution was sloppy. It doesn’t help Roxy didn’t pronounce Koragg or Mondo correctly which should have been easy to get right. Power Rangers needs to stop cheaping out when it comes to these big events. There are more than enough resources out there to make it work; the show just needs to take full advantage of them. I do appreciate nods to the past but if you’re going to do it you’ve got to put your all into it. This sadly missed the mark when it had a lot going for it.

At the end of the day though it’s a clip show and even the best clip show… is still a clip show. The framing device is usually what makes or breaks it and while this had a good one the changes to the clips just soured the whole thing. At least we had the diamond plot! Also, the title of the episode? One of Power Rangers‘ best.

Marvel Super Heroes: What The–?! Wolverine Adamantium Collection
A Babysitter’s Guide to Monster Hunting: How to Craft a Scary Story For Children
Link Tank: How Marvel’s Helstrom Missed Its Mark
Helstrom: The Comic History of Marvel’s Son of Satan
Tim Burton Finally Gets to Tackle The Addams Family… for Television