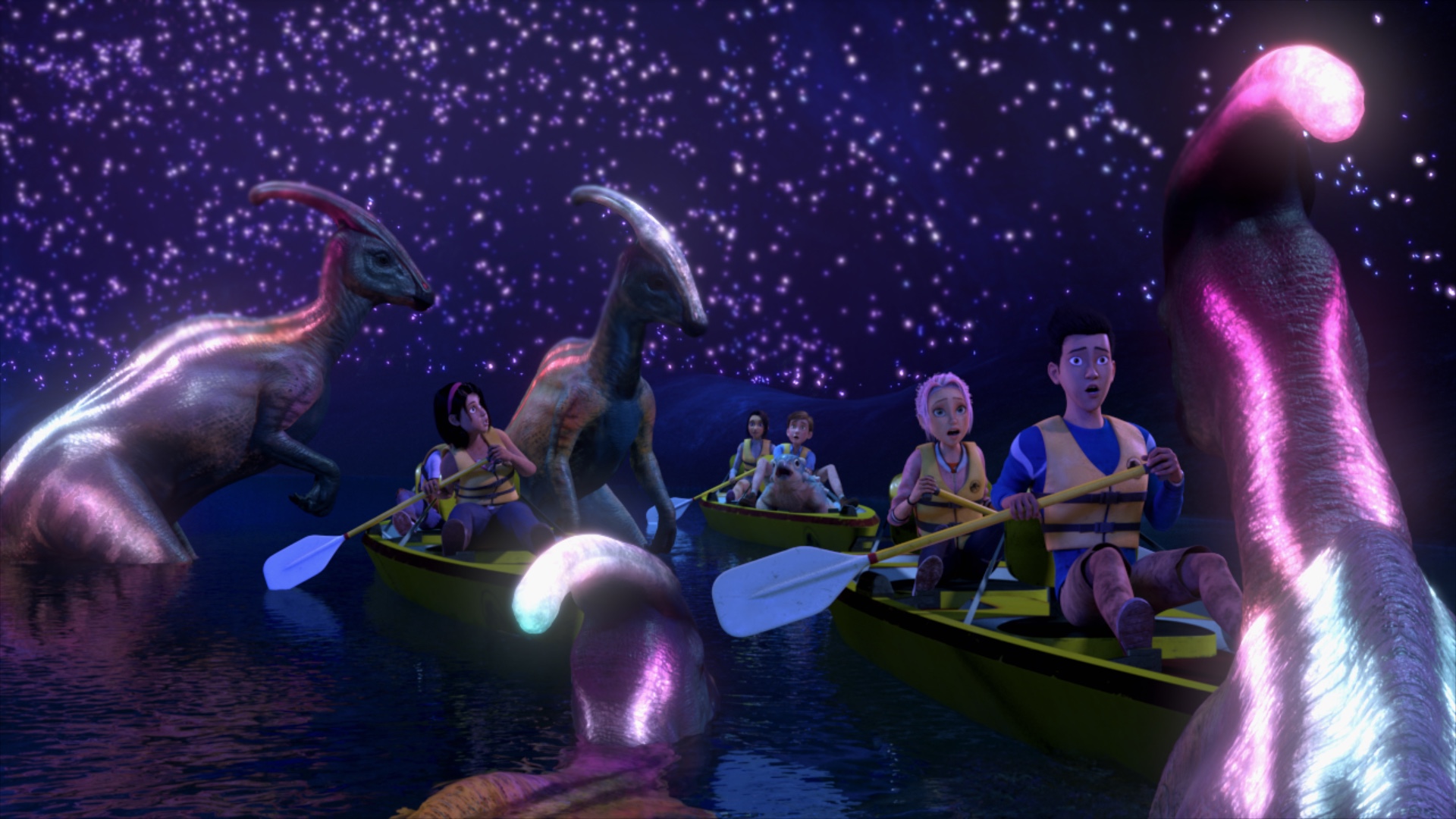 At first glance, Jurassic World: Camp Cretaceous doesn’t seem to fit in with the violent PG-13 dinosaur rampage thrillers we’ve come to expect from the Jurassic Park franchise. Its comical and lighthearted approach to storytelling and character development, not to mention the fact that it is (rather beautifully) animated, makes it seem as though this was meant to be a spinoff franchise similar to Lego Jurassic World. But as the story of six teenagers beta testing Jurassic World’s new adventure camp attraction unfolds, it becomes clear that Camp Cretaceous is not only canon, but could introduce elements that may influence future plotlines.

Camp Cretaceous begins a few days before the events of Jurassic World, but even before the Indominus rex escapes and the timelines officially converge, there are tons of references to the movies. (I love that Mr. DNA makes an appearance in the video game Darius is playing.) Dr. Sattler and Dr. Grant, played by Laura Dern and Sam Neill in Jurassic Park and Jurassic Park III are mentioned as having written articles lately, both on the subject of fossils, rather than real live dinosaurs.

And it is revealed that Bryce Dallas Howard’s Jurassic World character Claire Dearing’s nephews were never going to spend much time with their aunt that day, as she had intended for them to go to Camp Cretaceous rather than with her assistant Zara. But the campers’ shenanigans (namely ending up in the raptor pen and being involved in a stampede) overwhelm counselors Dave and Roxie; they need more staff, especially if more children are going to join them.

Though this change of plan may have turned out well for Claire, as her nephews would not have been present to give her that much needed moment of inspiration to release the Tyrannosaurus at the end of Jurassic World, it had rather disastrous consequences for Zara, who probably wouldn’t have been eaten by the park’s Mosasaurus if she wasn’t playing babysitter.

But the established Jurassic characters are not limited to mere references and unheard voices on the other end of a phone call, because our old friend/enemy Dr. Henry Wu (played by B.D. Wong in the movies but voiced by Greg Chun in Camp Cretaceous) makes an appearance when the kids visit the genetics lab. He’s in a hurry, getting ready for Simon Masrani’s visit to view the new exhibit. But of course he has time to show off for all of camper Brooklynn’s Internet followers.

The genetics lab is also where we get to meet Bumpy, the most precious little asymmetrical Ankylosaurus the world has ever seen. Not that he stays little for long; Wu tells the teens that the baby dinosaurs are designed for accelerated growth. This is a known fact in the books written by Michael Crichton, but is only mentioned in the movies in regards to the Indominus rex.

Also of note in the lab: a mysterious eyeball specimen that is never really explained, and a frozen mammoth specimen. Woolly mammoths, along with other extinct non-dinosaur creatures such as Dimetrodon and Smilodon, are featured in some of the Jurassic Park games, so perhaps this is a nod to that. Or, you know, foreshadowing that it’s possible to clone things that aren’t dinosaurs…things like little girls named Maisie, as seen in Fallen Kingdom.

A lab worker named Eddie hints that he worked for “the other guys” but never explains what he means by this. Combined with the revelation that Sammy, one of the teenagers, was sent to the island as a spy for Masrani’s rival bioengineering company Mantah Corp, this would seem to suggest that there might be another company out there trying to clone dinosaurs. It will be interesting to see if that has any bearing on the events of Jurassic World: Dominion.

Despite a few misadventures and near-death experiences with a Carnotaurus (possibly the same one from Fallen Kingdom seen outside the Lockwood Manor, the one with the scars on his face), everything is going pretty good with the first group of Camp Cretaceous campers. But this is Jurassic World, and we all know that the good times were not going to last.

The children are never the center of the action that we see in Jurassic World, but they are often on the periphery. After her escape, it would seem that our girl Indominus rex might have caused a little more–all right, a lot more–death and destruction than we realized, terrorizing the kids and eating some park personnel before going back to terrorize Claire and Owen and eating… other park personnel.

But it’s not just the kids getting to experience the fun (sure, let’s call it fun) that is the Jurassic World incident. During the beginning of Indominus’s rampage, when Owen is watching the team’s heart monitors blink off to indicate each death, counselors Dave and Roxie have a similar moment of horror as walkie-talkie after walkie-talkie turn from screaming to static. When Simon Masrani’s helicopter crashes, we realize just how close the six main characters have been to the events we see in the movie. It’s almost identical to the live action version as the copter tumbles through the air and smashes into the aviary.

Though events occur at the same time and on the same island, Camp Cretaceous is not telling the same story as Jurassic World. The campers are trying to survive a different set of catastrophes than Owen and Claire, and they have their own stories to tell. After the first incident at Jurassic Park, and especially after the whole San Diego fiasco, the world was introduced to dinosaurs as something more than fossils. Darius, Ben, Sammy, Kenji, Yasmina, and Brooklynn have literally never known life without cloned dinosaurs in it.

Does that give them a different perspective than the adults? Does it give them a better chance of survival? Let’s hope so, because with the way season one ends, it looks like Isla Nublar isn’t done with our campers.

Dexter Revival Will Have “No Resemblance” to Original Finale
Marvel Super Heroes: What The–?! Wolverine Adamantium Collection
Where Did Star Trek: Discovery Travel to Get Those Gorgeous Shots of Hima?
Marvel’s Daredevil – Teaser Trailer
Fargo Season 4 Episode 5 Review: The Birthplace of Civilization