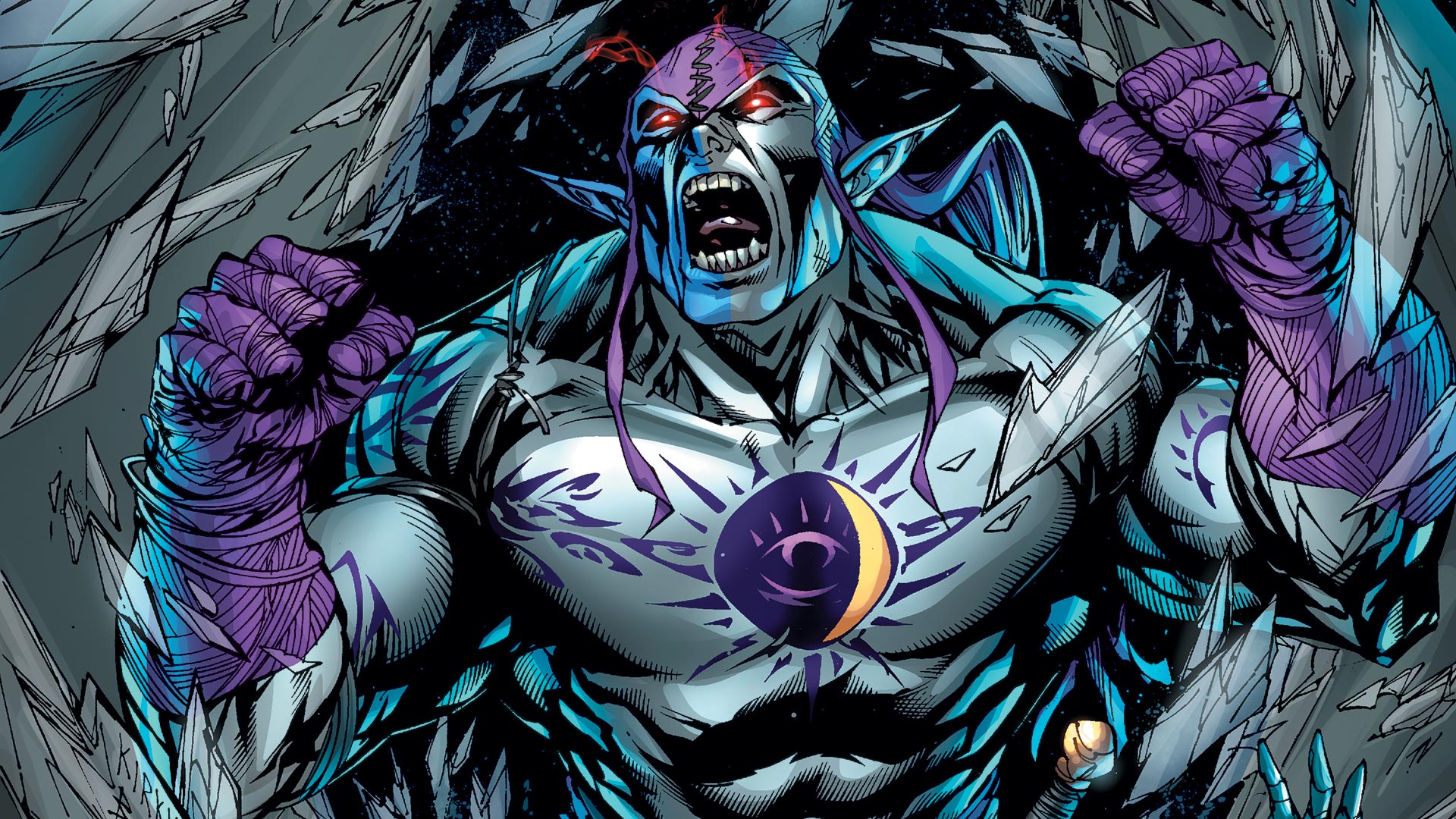 “I know you’re in there, Eclipso.”

With these words burgeoning supervillain Cindy Burman has introduced a whole new world and threat to Stargirl. After killing her father and attempting to defeat Courtney and co. it’s clear that the Dragon King’s daughter is keen on getting revenge, which is lucky as she’s just invoked the name of a deep cut character who could be a way of introducing an entirely new supernatural layer to the series.

Get ready to meet Eclipso.

1963 was a massive year for comics. At the House of Ideas, the X-Men, the Avengers, and Iron Man were bursting from the pages, changing the future of comic books and ultimately Hollywood forever. Meanwhile, their Distinguished Competition saw the Silver Age as a time for reinvention, taking classic characters like Green Lantern and The Flash and turning them into legacy characters. That doesn’t mean that new characters weren’t being created, though, and in sci-fi horror anthology House of Secrets #61 Bob Haney and Lee Elias imagined a new type of archetype for the publisher. It was a Dr. Jekyll and Mr. Hyde style creation who was both hero and villain and first appeared in the story “Eclipso: The Genius Who Fought Himself.”

After a trip to Diablo Island to take a photo of a solar eclipse, Dr. Bruce Gordon ignores the warnings of the indigenous population and ends up offending a god, Morphir, and then killing him. So basically your average colonizer shenanigans. It’s a surprisingly nuanced take on what could have been some classic comic book racism where instead the blame is solely on Dr. Gordon and his ignorant and arrogant actions.

After killing the god by tripping him over a cliff, he heads back to his homeland to complete his work on the Solar City, a futuristic utopia fueled entirely by the sun. Alas, he is nearly thwarted by the god he apparently killed when an eclipse struck during the ceremony… but the big reveal comes in the in media res opening page when it’s revealed that the villain is none other than Gordon himself, becoming his own literal worst enemy. The split is explained by Morphir cutting Gordon with his black diamond before he falls to his death, and in a humorous twist the villainous side of Gordon always hides his costume and the black diamond he took from Morphir before his good side wakes up.

Though Eclipso’s early adventures are incredibly fun to read, the version of Eclipso that we’re more likely to see came to the DC Universe many years later. From his debut in 1963, Eclispo evolved in the pages of House of Secrets, his powers becoming less directly connected to solar eclipses and expanding to more general light phenomena.

But it was in 1992 when Eclipso was reintroduced in the gem-heavy Eclipso: The Darkness Within event (there’s literally a plastic gem on the cover of the first issue… I know, I own it!) that we get to know the new version of the character who was revealed to in fact be a villainous spirit who had possessed Gordon rather than Gordon himself. That is clearly the version that we’re dealing with in Stargirl, so if you want some idea of where the story might be going in season two then keep reading.

In this iteration Eclipso is discovered by a maniacal and murderous treasure hunter who once again goes against the wishes of the native population, this time in “The Upper Congo.” His quest for riches leads him to a black gem which he kills his partner to possess and then has chopped into thousands of pieces in a London jeweler in the 1800s. Stealing from indigenous people and trying to get rich has bad consequences (shock!), and 100 years later Lar Gand discovers a strange planet where the demon Eclipso has been collecting the pieces of his shard and hiding. We then meet modern day Bruce Gordon who still believes he is to blame for the creation of Eclipso. He soon learns that isn’t the case when he discovers other shards of the black diamond which the spirit is using to possess and control super powered earthlings.

This concept of Eclipso as a sentient being that lives in or is connected to the black gem known from here on out as the Heart of Darkness is a consistent part of the villain’s modern lore. That’s why when you saw Cindy pick up the black diamond shape gem in The Wizard’s basement, she referenced the rogue who we could then hear laughing in his shiny prison.

In Eclipso: The Darkness Within, they build on the connection and struggle between the villain and Gordon by adding a motivation that Eclipso wants to destroy Gordon’s solar research as solar power and light are what defeats the villain and keeps him trapped in his jewel shards. We know that Blue Valley and the project for New America was keen on clean energy and there is a likelihood that Eclipso was trapped after trying to stop the Injustice Society and their plan to keep his power. But there’s a different theory that I am far more inclined to believe, and it’s one that would introduce a new teen hero.

It’s likely that Cindy will probably try to harness the power of Eclipso, likely becoming its host like many DC characters before. One of his most formidable vessels was Jean Loring who readers will remember is the ex-wife of Ray Palmer and the superhero murderer in the controversial comic event Identity Crisis. All of that is to say that there is a precedent for Eclipso being a woman, though honestly Stargirl hasn’t been too worried about following conventions in the past.

But whatever route the creative team decides to go with Cindy and Eclipso, there’s a chance that they’ll decide to explore his origins and stray from the somewhat problematic aspect of colonial explorers and the theft of native artifacts to use a story and vision for the character that was introduced during the New 52 era of DC Comics. Excitingly, it’s an arc that ties Eclipso to one of DC’s strangest and most fantastical fantasy spaces: Gemworld.

During DC’s New 52 era, Eclipso was reimagined as Lord Kalaa, an ancient inhabitant of Gemworld who’d turned on his own people and become a tyrannical leader after his powers were sparked by a… you guessed it… eclipse. If this doesn’t sound familiar, don’t worry as it took place in lesser known series like Team 7 and Swords of Sorcery: Amethyst.

The important part to note is that here Eclipso is part of the Gemworld royalty born from the House of Onyx and the House of Diamond who, after enslaving and oppressing the House of Amethyst, was imprisoned in a gem by the then Princess of House Amethyst, Lady Chandra. But he returns and is defeated by Princess Amethyst, but not before he kills her family. Now that Cindy has the Heart of Darkness, there is a large chance that we could see DC finally bring Amethyst Princess of Gemworld to the small screen.

If Cindy unleashes Eclipso it could be an easy way to introduce Amethyst to the DC TV universe. The young Princess could head to Blue Valley in order to get revenge on the creature who killed her parents or simply to trap him back inside the gem for the good of the universe. Either way it seems like a far more interesting route rather than trying to tie it to his early origins, especially as DC Universe played with some similar aesthetics and themes with their recent representation of Rita Farr and the origin of her powers in Doom Patrol.

Whichever route Stargirl goes, this is a very interesting twist into the supernatural for the series. The first season has leaned into an Americana nostalgia that despite featuring giant mechs, superpowered teens, and numerous supervillains felt very grounded. It’ll be really exciting to see what happens now that a totally cosmic and creative new threat has been introduced, especially in the hands of someone as maniacally messed up as the iconic Cindy Burman.